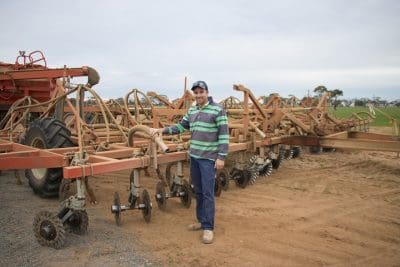 Leigh Bryan uses splash plates fitted to his planter to spread 35pc of the seed randomly across the soil surface to achieve ‘zero row’ spacing. This practice aims to increase yields in paddocks where the weed pressure is low as a result of consistent management to minimise weed seed set.

His crop-guided shielded sprayer is working a treat, he is confident with chaff lining and now he is testing the possible advantages of zero row spacing.

His aim is weed-free paddocks with crops growing at their full potential across the 2400 hectares of cultivation within 30 kilometres of Swan Hill in Victoria’s Mallee region.

“Being crop-guided, the shielded sprayer provides precise control over weeds and crop volunteers,” he said.

“It makes it possible to suppress medic and other hard-to-kill weeds in lentil crops and take self-sown wheat plants out of barley paddocks. Keeping crops as clean as possible.”

Using the shields strategically over the past seven years, Mr Bryan has drastically reduced weed numbers and can concentrate on preventing seed set in just the odd plant here or there.

The shields allow him to use more cost-effective pre and post emergence herbicide options to prevent seed set of grass and broadleaf weeds in cereal crops.

“The shielded sprayer also makes it possible for me to crop top at the optimum time to have maximum impact on weed seed set without damaging the crop, regardless of the crop maturity stage,” he said.

As a harvest weed seed control tactic, narrow windrow burning was a good ‘get out of gaol’ tactic but Mr Bryan has been chaff lining now for three years.

He said depositing the chaff-only fraction in a narrow line between the harvester wheeltracks was a very effective way to keep weed numbers low.

“Dropping the chaff line between the wheeltracks, rather than into the wheeltracks, minimises disturbance of the seeds, reduces weed seed contact with soil and promotes more rotting down over summer,” he said.

“The chaff lining chute is also cheaper to make and install than a chaff deck.”

Last year Mr Bryan used the chaff lining chute in all crops except canola and found there was no problem pulling the tynes through at planting this year.

“We first tested the idea in clean paddocks hoping to keep them clean,” he said.

“We are now completely confident in the system and will be using the chaff lining chute in all crops across the farm this season. It has proven particularly valuable in lentil crops.”

If weeds become a problem in the chaff line Leigh is prepared to band spray the chaff line with pre-emergent herbicide, but this has not been necessary to date.

For the last three years Leigh has also been trialling zero row spacing in a bid to capture optimal yield from his crops.

The planter has been fitted with splash plates that spread 35 per cent of the seed at random while the remaining 65pc of the seed is sown conventionally, down the tube.

“This will only work in relatively clean paddocks,” he said.

“With no trifluralin applied the in-crop weed control is reliant on strong crop competition and very, very low weed seed bank. Next year I will be looking at different pre-emergent herbicide options and how they might fit in this system.”

The seeding operation is faster than normal and this helps throw sufficient soil to enable successful germination and establishment for the seeds spread on the surface.

In Mr Bryan’s on-farm side-by-side trials, the zero row spacing strips are showing that the idea has promise.

“There are others playing around with the idea of zero row spacing too and I think it has potential,” he said. The outlook for weeds in a zero row space environment (left) compared to a conventional 375mm row space configuration.

“In 2016, a strip-trial in barley resulted in the zero row spacing strip yielding 4.994 tonnes/ha compared to 4.889 t/ha in the conventionally sown crop at 375-millimetre spacing.”

This result gave him the confidence to sow one-third of the farm using zero row spacing this season.

To achieve the best results he sows considerably more seed but said this was cheaper than pre-emergent herbicide and resulted in potentially higher yielding crops.

The results of this large scale trial will be very interesting in terms of both weed management and crop yield.

“The random placement of stubble is easier to sow through the next year. It still provides trellising for pulse crops and shades the soil to conserve moisture and reduce soil surface temperatures,” he said.

“There can be a 10-day delay in germination between seeds sown on the surface compared to those sown into the soil because the surface seed needs rain to germinate.”

When it comes to growing a competitive crop Mr Bryan emphasises the need to get the crop planted on time, keep it healthy and well-fed.

When planning the crop rotation for paddocks he ranks them according to weed burden and uses a four-year break crop system to clean up paddocks with high levels of grass weeds.

“In a weedy paddock we start with a pea/lupin brown manure, then plant canola, in year 3 we plant a cereal and use the shielded sprayer in-crop then finish with a lentil crop,” he said.

“This gives us a four-year run at grass weed control and then we can return to ‘normal’ rotation with a low weed seed bank.”

Once weed numbers are low Mr Bryan said it was relatively easy to keep them low through the consistent use of both herbicide and cultural practices.

“When weed numbers are low it is possible to look at ways to improve yields and reduce production costs,” he said.

“That’s what I hope to achieve with zero row space planting, supported by crop rotation and chaff lining to manage survivors. If there is evidence that weed numbers are increasing, then we have other tools at the ready to stop a weed blow-out.”