CARGILL Australia Limited is preparing to export bulk grain in its own right from Port Adelaide using a mobile shiploader which is due to arrive at South Australia’s biggest grain port in the coming quarter.

Based on the shiploader’s capacity, Cargill estimates its facility at Berth 20 in Inner Harbour could load up to 540,000 tonnes of grain annually, or 60,000t a month for nine months, including 300,000t of its own grain.

As a new operator, it will provide competition for Glencore subsidiary Viterra as Port Adelaide’s and South Australia’s biggest bulk grain exporter.

The Australian Competition and Consumer Commission (ACCC) in March made a draft determination that Cargill should be granted exempt service-provider status to operate at Berth 20.

This has enabled the US-based multinational to make its first move into port-service provision.

Cargill’s 5 per cent stake in Quattro at Port Kembla in New South Wales is currently Cargill’s only investment at Australian ports.

Viterra operates six of South Australia’s eight grain port terminal service facilities currently in use, and in its submission to the ACCC, Cargill said Viterra’s share of South Australian bulk grain exports over the past seven years was 97 per cent. 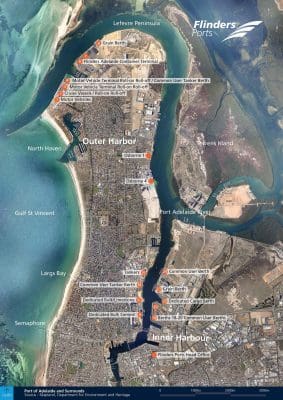 Cargill has been the only active exporter at Port Adelaide LINX since the 2015-16 shipping year, and has engaged LINX to provide stevedoring and operation services at Berth 20.

Cargill has exported grain via Viterra terminals in Port Adelaide and elsewhere, and may continue to do so.

Under the GrainFlow banner, Cargill has four grain sites in South Australia — Crystal Brook, Maitland, Mallala, and Pinnaroo — which have a total storage capacity of 665,000t, while Viterra currently operates more than 60 up-country storage sites across the state.

Cargill has said its proposed port terminal facility and its current upcountry storage facilities were likely to increase competition along the bulk grain-export supply chain.

Cargill therefore expects to have excess capacity at Berth 20 once it has exported 300,000t of its own grain.

“That being the case, Cargill is committed to welcoming third parties to utilise any available capacity in its facility,” Cargill said in its submission.

“All services would be offered and charged on a commercial basis.”

“A grant of exemption for Cargill is consistent with the ACCC’s published view that the removal of unnecessary regulation may demonstrate to potential new entrants that they will likely be provided with the flexibility to compete with dominant existing service providers.”

The mobile shiploader to be used at Berth 20 was designed in Europe.

Its significant components were supplied and built in Europe, and the superstructure was built in China.