THIS YEAR will be a significant one in the history of bulk handling in South Australia.

It will mark the first time a bulk handler other than Viterra and its predecessors has operated a bulk grain port in South Australia, and it already has traders and growers examining expanded opportunities.

The newcomer is the T-Ports facility at Lucky Bay on the Eyre Peninsula (EP), and while its opening is still many weeks away, the T-Ports bunker sites are ready to receive grain from the upcoming harvest.

Lock grower and T-Ports director Andrew Polkinghorne said while Viterra appeared set to continue its high standard of service to growers at its EP sites, T-Ports was already bringing some competition to the market.

“In this area, farmers are beginning to think about alternative supply chains,” he said.

“There will be T-Ports, and perhaps FREE Eyre and Iron Road as well operating different sites on the EP in the future, and farmers are positive about the change.

“We’ve had a monopoly supply chain, and it’s been one of the more expensive, if not the most expensive, in the country.” 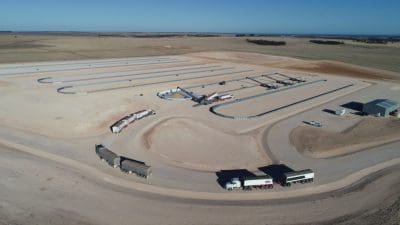 T-Ports’ Lock site receives grain for its commissioning phase which started in April. The site will receive its first commercial grain from the upcoming harvest. Photo: T-Ports

In addition, the 31 May closure of the rail line into Viterra’s Port Lincoln terminal has prompted growers to rethink their grain marketing and delivery options.

He said all three factors were allowing growers to change their time-honoured practice of delivering everything to Viterra sites as soon as possible after harvest.

“Harvest logistics are changing, and farmers are beginning to need to store on-farm.”

In recent months, at least one major trading company has been willing to buy EP grain plus carry in on-farm storage.

Mr Polkinghorne said it was one of several companies willing to post bids high enough to justify growers taking their grain for a long drive at or after harvest last year.

“Lock to Crystal Brook is about 400 kilometres one way, and the price some traders were offering more than covered what it was costing growers around here to get it there so they could put it on the train and send it to NSW.”

“Most years we haven’t been able to participate in the domestic market.

“It’s only when there is a drought that freight into the domestic market will work for us.”

Some South Australian grain has also made its way to consumers via vessels loaded at Viterra terminals and discharged at east-coast ports.

“Where there was one bulk handler on EP, there will be two this year, and maybe three or four in coming years.”

“With these new port facilities, it’s creating additional competition in the market, and we’re already seeing that on the EP with prices posted at Viterra and T-Ports sites.

“It’s certainly good for growers to get the opportunity to receive higher prices.”

Ingham’s’ feedmill at Murray Bridge opened earlier this year, and has become a significant buyer of Mallee and South East grain, and containerised exports out of Semaphore.

“The domestic market is opening up.”

However, export is expected to continue to absorb most of South Australia’s grain in years when eastern states are not in drought.

In its latest Monthly Receivals Report, Viterra said demand for outturns via road and rail into the South Australian and east-coast domestic markets has remained strong.

Since last year, grain from South Australia has been hugely important in filling consumer demand in inland NSW, where drought shot to pieces the normal supply chain for regional millers.

Mr Wallis said the NSW requirement last year and into this year has pulled grain from Upper EP locations including Kimba and Buckleboo to railheads like Bowmans and Crystal Brook in the Port Adelaide zone.

“Whether we get to a situation in future years when we’re below (a national wheat crop of) 18Mt remains to be seen.”

“Imports like we’re seeing now may end up capping the price.”

However, imported wheat without costly heat treating is unlikely to make its way inland to NSW consumers, and SA grain looks like it could be an attractive option for the trade and consumers as central and northern NSW struggles through another drought-affected growing season.

While most growers in South Australia’ are on track for average yields, Mr Wallis said forward sales from growers were limited.

“Most growing areas are on track for an average season, but the frost risk is there for a lot of guys, and some got hit badly by frost last year.”

He said new-crop bids for wheat at $300 per tonne and barley at $250-$260/t delivered to port were historically high, but were around $100/t below the peak of the market for cereals harvested last year.

Those prices of $400/t were being paid at rail sites where grain was being accumulated for the drought-hit NSW market, and Mr Wallis said some SA growers missed them.

“New-crop sales have been down on the level we would normally see at this time of year.

“There are probably growers out there who are underdone in forward sales at historically good prices.”

“If the drought continues in the eastern states we may see those high prices again, but it’s unlikely.”

“It’s not uncommon to see up to 30-40pc right across the state in forward sales from growers before harvest, but we are seeing people being more conservative this year.”

“Some people were 30pc forward sold when they got to harvest last year, but because their yields came in well below what they were hoping for earlier in the season, they found they were 70-80pc forward sold.”

Mr Wallis said that prevented them from being able to capitalise on the record prices which appeared post-harvest.