GRAIN haulage costs top the list of freight constraints which continue to dampen Australia’s competitiveness on the international commodities market, according to a new report out today. 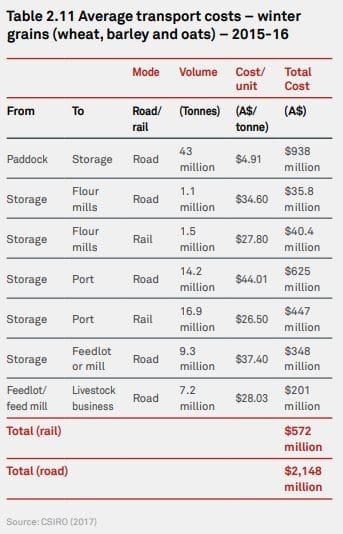 When analysing the table above, it is important to note that:
• The cost of moving grain from paddock to storage includes the movements to both on-farm and off-farm storages. This means that the average cost of transporting grain from farm to off-farm storage is higher than the $4.91 tonne as expressed in the table, which is the average cost of all movements.
• The figures in Table 2.11 do not include storage and handling fees, receival fees, terminal storage, vessel loading, etc. – they only represent freight costs.

The report, in which AgriFutures Australia commissioned Deloitte Access Economics to investigate farm transport costs from paddock to port, shows logistics are the largest single cost item in the production of many agricultural products.

“In Australia, freight costs are highest for grains at 27.5 per cent of gross income, and fruit and vegetables at 21pc,” Mr Harvey said.

“Knowing how much farmers pay for transporting their produce to consumers is crucial to measure the competitiveness of Australian farmers and to find out where the transport of agricultural goods faces pinch points and bottlenecks. The report shows that Australia has comparatively higher freight costs for many of our key commodities compared to our international competitors and it’s hurting our bottom line.

“Strategic planning and regulatory framework are required to ensure infrastructure can be efficiently utilised by industry.”

“NFF welcomes AgriFutures Australia’s work in this space as it gives us solid data about the agricultural sector and challenges faced by different industries,” Mr Mahar said.

“It is critical to look beyond the ‘now’ to consider future agricultural freight issues and to highlight possible options for potential improvement in transport infrastructure and regulation within the agricultural sector.”

The domestic analysis, excluding poultry as competition with overseas producers is negligible, is complemented with research of international agricultural supply chains to benchmark Australia’s performance and its ability to compete on agricultural transport costs.

As Canada is the major exporter of canola and of other grain types, the report analysed Canada’s freight costs to provide a useful basis for comparison for Australian freight costs, noting the different geographies and distances to export ports. 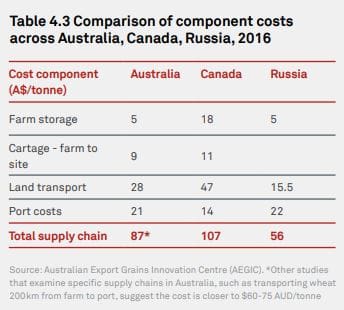 On average, Australia has comparatively lower freight costs for grain (A$60-87 per tonne) compared to Canada (A$107/t).

Although distance and transport cost do not share a one-for-one relationship, the report found that Canadian grain producers faced higher transport costs since the rail freight journey required to move grain to ports is significantly longer. 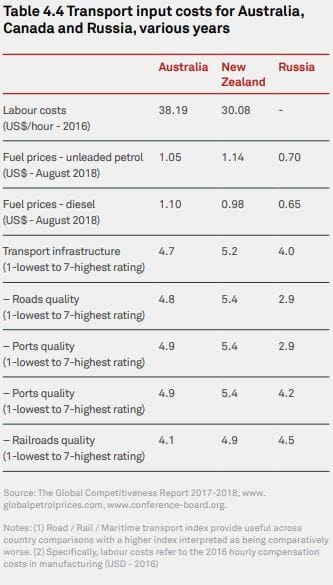 Russian wheat is cheaper to move to port for export largely due to the ruble being weaker relative to the A$. In addition, the better quality of storage and handling infrastructure in Australia adds to the overall cost, but provides greater control over the specifications and quality of grain received and stored.

Despite Australia’s size, the average transport distance for grain, from farm to port, is one-sixth that of export competitor Canada.

However, given the fixed cost associated with loading and unloading transport vehicles, the cost of land transport is only half of the cost in Canada.

An additional element of this cost differential is that rail transport costs, on a per kilometre basis, are up to five times lower in Canada, due to the more efficient rail network and train operating standards.

In general, Australia’s export supply chain is more flexible due to the availability of multiple ports and the opportunity to mix between road and rail transport.

The longer distances required for transport to a few main ports require infrastructure to exist across provincial boundaries, whereas in Australia, export grain supply chains tend to lie within state boundaries.

Russia utilises its extensive rail network for longer journeys, and relies on its more efficient road network for shorter journeys of less than 500km.

In terms of farm storage, Australia has comparatively higher on-farm storage costs than its competitor Canada. This is because, in Australia, most grain is stored in centralised bulk storage units as soon as it is harvested. In contrast, nearly all of Canadian export grain is stored on farm and transported to port only when required for shipping.

A possible reason for Russia’s low storage costs is the relative weakness of the ruble against the A$ and the limited need for airtight storage to facilitate fumigation, as the winter in most grain-producing regions is cold enough to kill most grain insect pests.