Hyden to get biggest increase in CBH 2020 network spend 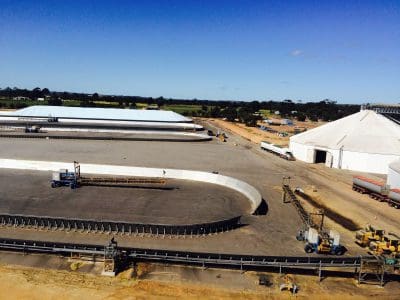 WESTERN Australian bulk handler CBH Group is expanding storage capacity at six of its sites this year, with the 136,000-tonne increase planned for Hyden the biggest.

Not far behind is the Moora site, where the Georgiou Group has already been awarded a works contract to expand the site’s capacity by adding 132,000t of permanent storage through open bulkheads, and upgrading the marshalling area.

WCP Civil has been awarded the contract to expand storage with open bulkheads at Konnongorring by 84,000t and at Watheroo by close to 70,000t.

Contracts are yet to be awarded for expansions this year of 127,000t of additional storage at Brookton, and an extra 14,000t at Dale.

CBH chief executive officer Jimmy Wilson said the awarded contracts were part of the 2020 network expenditure that is expected to cost more than $200 million.

“We are continuing to progress our network capital and maintenance projects for the benefit of all our growers,” Mr Wilson said.

“Our growers operate in an increasingly competitive market, so these projects are about keeping fees competitive, increasing throughput capacity and efficiency and moving more tonnes to port at the right time.

“We’re pleased that we’re able to continue working with two Western Australian contractors, who are familiar with what the co-operative and our growers require for the busy harvest season and throughout the year when grain is transported to the port terminals.

CBH general manager operations Ben Macnamara said work had started on the first of the network projects this year, and planning was under way for projects in 2021 and beyond.

This year’s works program follows last year’s record network capital and maintenance investment by CBH Group, which is WA’s major bulk handler by far, and one of the world’s biggest grain exporters.