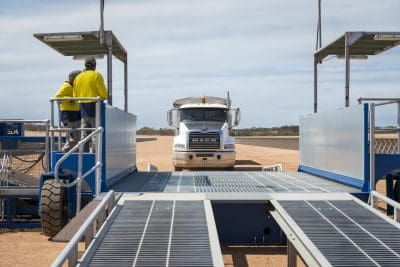 HARVEST has kicked into gear in South Australia this week, with warm to hot weather allowing growers on the Eyre Peninsula and Upper and Mid North to take off significant tonnages of barley and wheat.

Vying for loads which growers opt not to store on farm are two new entrants to the bulk-handling scene, ADM Grain at Port Pirie South, and T-Ports’ Lucky Bay facility. 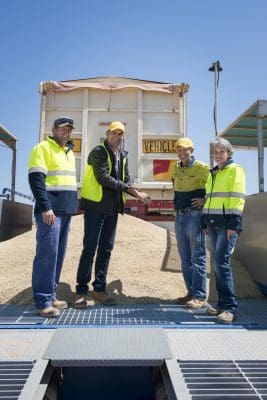 Both have received a number of loads in the past week, while Viterra, as the state’s dominant bulk-handler, has taken in 12,645 tonnes in the week to 20 October to take its harvest total to 14,447t.

ADM national accumulation group manager Damian Bradford said the first grain into the new Port Pirie site was delivered on 15 October, and wheat and barley was now being received.

“Harvest is now in full swing, and the site’s opening hours will be based on grower delivery demand.

“Generally we’re seeing quality is thus far very good, and grain is coming in from the north, and from southern regions, as well as the Port Pirie district.

“We expect harvest momentum to build up this week.”

On the Eyre Peninsula, T-Ports is now taking grain into its Lucky Bay as well as its Lock site, with Jack Kaden and family from Mitchellville delivering Spartacus barley as the maiden load of grain to the bunker.

In its most recent harvest report, Viterra said eight sites in its network in the week to 20 October took in their first loads, mostly barley, with some wheat, field peas and lentils.

“As well as receiving both wheat and barley we also took our first receival of PEAK at Lock after opening the segregation there for the first time this harvest,” Mr Pratt said.

PEAK is a new segregation for field peas, which Mr Pratt said was opened at Lock in response to grower feedback.

In Viterra’s Central Region, Crystal Brook, Snowtown and Two Wells had their first deliveries for the 2019/20 harvest in the week to 20 October.

Viterra Central-Region operations manager Jack Tansley said the region’s harvest had commenced slowly, and included the reopening of the Gladstone site which has received a $4 million upgrade since over recent months.

“On Friday 18 October, we were pleased to invite growers and the local community to Gladstone to unveil a new state-of-the-art classification centre, automatic grain probes, a fully automated 40 metre weighbridge and shed resealing,” Jack said.

While Viterra’s Eastern Region is yet to receival its first up-country load, its Inner Harbour site in Adelaide received 57t to kick off deliveries for the current harvest.

Viterra said its operations in the week to 20 October have included the loading of an export vessel at Port Lincoln, and a train at Snowtown for the domestic market.