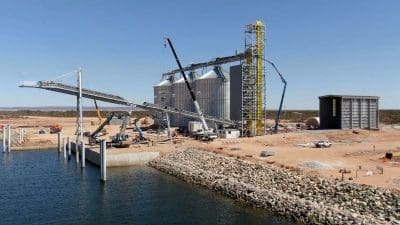 THE LUCKY Eyre transhipment vessel is on its way to South Australia to load the first export cargo of grain from the T-Ports terminal at Lucky Bay.

In its latest update, T-Ports chief executive officer Kieran Carvill said the vessel left Shanghai earlier this month and would arrive in South Australia next month via the northern New South Wales port of Yamba.

“She is now in Australian waters, with all vessel importation and customs formalities to be conducted in Yamba,” Mr Carvill said.

“Given the trip from China to Australia is her maiden voyage, some additional work may be required when she arrives in Australia before she moves on to Lucky Bay during February.

“At this stage, we anticipate exports to commence soon after her arrival in Lucky Bay.”

Mr Carvill said grain at both the Lock and Lucky Bay bunker sites was being fumigated to ensure it was export ready.

“There has been some movement of grain between the Lock and Lucky Bay bunker sites for consolidation and fumigation purposes, and we expect this movement will increase as the export season kicks into gear.”

T-Ports’ terminal is located near its Lucky Bay bunker site, and Mr Carvill said its infrastructure was now in place and mostly installed.

This includes the conveyor to take grain from the silos to the transhipment vessel at port. 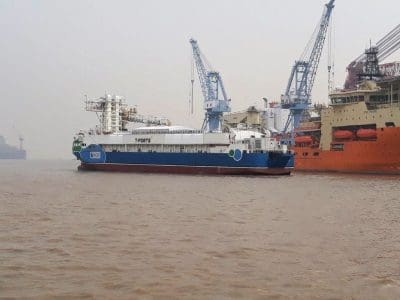 The T-Ports transhipment vessel Lucky Eyre prior to its maiden voyage to Australia. Photo: T-Ports

“Works are now focused on pre-commissioning on a staged basis including mechanical checks, electrical testing and silo sealing.

“Equipment testing will commence once the appropriate software has been rolled out in early February.”

The export operations room which includes the control centre and a laboratory to ensure grain meets export specifications will be completed this week.

“Dry and wet commissioning will be conducted over the next month.”

“We’re very happy with what we’ve received in our first harvest.”

T-Ports said the quality of grain it has received has been varied, with high-protein wheat accounting for many deliveries.

“Segregations will be reviewed as we move forward into next harvest.”

Low rainfall has made the 2019 growing season a tough one for most on the Central and Upper EP, with some crops cuts for hay due to low yield potential.

“Having a smaller harvest, while disappointing for both growers and T-Ports, has given us an opportunity to identify any bugs in the system and look at ways to improve upon these,” Mr Carvill said.

Industry estimates say T-Ports has received a little over half the 350,000 tonnes initially hoped for based on an average season for growers in its drawing arc.