Outlooks mixed on benefit of Inland Rail in Qld Construction is under way on the Narrabri-to-North Star section of Inland Rail in New South Wales. Photo: ARTC

WITH construction yet to begin on the five Queensland alignments of the Inland Rail project and plans for adjacent commercial projects already underway, southern Queensland producers, businesses and other stakeholders are split on the predicted impact the over $15 billion project will have on the industry.

The 1700-kilometre rail freight line features 13 individual projects running from Melbourne to the port of Brisbane.

The Parkes-to-Narromine section in central New South Wales was the first to be completed in late 2020 with early construction works underway on the Narrabri to North Star section.

Queensland is yet to see construction commence on the project.

Progress on one of the projects most contentious alignments, the Border to Gowrie (B2G) section, has stalled at the Environmental Impact Statement (EIS) stage due to calls from farmers and other stakeholders to reconsider the preferred alignment which runs through the Condamine Floodplain.

The Queensland Coordinator-General (CG) has requested additional information to be included in the draft EIS with the process extended until February 2023.

The B2G alignment is set to be a key connection point between Queensland producers and the Brisbane port as well as connecting NSW grain producers with the beef-intensive Darling Downs region.

Hubs being built near Toowoomba

The predicted importance of the B2G line has spurred the creation of two intermodal hubs which will be built at sites west of Toowoomba.

The planned Wagner Corporation’s facility at the Wellcamp airport site is intended to utilise only the Inland Rail alignment, while the InterlinkSQ precinct is intending to use the existing Queensland Rail line as well as tapping into the new system when it is completed.

Talks are under way between rail freight company Pacific National to have a home at the Wagner’s site with SEAWAY Intermodal already confirmed as terminal operator of the InterlinkSQ project.

It is anticipated that both these will capitalise on the demand of producers wanting their product to be freighted to the Brisbane port.

Wilson International Trade Peter Wilson said he is excited about the opportunities Inland Rail will bring to Australian grain producers.

He said the project with intermodal hubs constructed alongside will be of “enormous” interest to producers in southern Queensland and offer more efficient transport opportunities.

“We will have an artery that we can push grain south and we can bring grain north; we can move animals around,” Mr Wilson said.

“It is going to change grain bases in Australia, because suddenly grain flows are going to be very different to that which we have become accustomed.”

Mr Wilson predicted that Toowoomba would become very attractive for businesses looking for an ideal location to set up a mill or similar operations.

“I can see more mills being built in the area,” he said.

“We have plenty of labor, plenty of goods and services to access and it’ll be right by a rail hub.”

Mr Wilson said the delays in construction with the B2G alignment have significantly affected the Wellcamp facility with potential investors awaiting a firm timeline for the project.

“It is glacial in the way it’s moving.

“People are absolutely watching, people are aware, but they are not going to commit millions of dollars until they see some sleepers going to be laid in Goondiwindi.

“As soon as we start seeing sleepers and track being laid in Goondiwindi I think you’ll see people with plans.”

Goondiwindi and Darling Downs are major producers of cotton as well as grains and the Inland Rail is seen as having potential to transport both to export markets. Millmerran Rail Group (MRG) chair and farmer, Wes Judd, is a longstanding critic of the B2G alignment which travels through the Millmerran and Pittsworth districts, past the planned hubs at Charlton and Wellcamp, and connecting to the Gowrie-to-Kagaru section near Toowoomba.

Although he primarily opposes the project due to the potential impact of constructing the line through the Condamine Floodplain, Mr Judd also questions whether the Inland Rail project is needed at all, with most Darling Downs producers using road transport and NSW businesses choosing to export their product via Newcastle port.

He said using the rail line as opposed to road transports creates “so many inefficiencies” for primary producers.

“Say, a producer puts a bale on a truck at Cecil Plains in one lift, it then goes in on a B-double straight to the port,” Mr Judd said.

“It’s one lift on that truck and one lift off, whether it be a container or individual bales.

“You’d double the handling if you have to truck your product to be put on the train from your property.

“The efficiencies and economics don’t stack up.”

Mr Wilson also conceded that some logistics models would require “volume and velocity” to be viable for producers and packers, especially when shuttling product from Toowoomba to the Brisbane port via rail.

He said it is difficult to judge at this stage, and the economics will become clearer once construction commences in Queensland.

InterlinkSQ site to use Western line 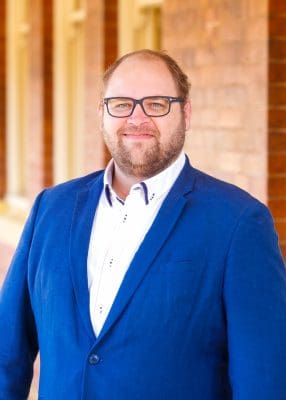 Mr Blatts said, although the project is still in the early stages, they are confident that agricultural industries will see the benefit in using the facility and that the economics will stack up.

“We will be up and running with our rail in the first half of next year through SEAWAY intermodal terminal operators,” Mr Blatts said.

“The firm intention is that we will have agricultural volumes including grain leaving the site from probably quarter two next year.”

Mr Blatts said the interest is mostly coming from businesses outside the region and those who are new to the space.

He said most of the financial benefits from the project will flow to people wanting to move high volumes, especially those looking to aggregate product at the rail head.

“Rail works in high volume, it works through aggregations,” he said.

“We’ll be in the ground constructing in the next four to five months.”

“That will add to the momentum and I think it will give people a bit of confidence that it will happen.”

“The South West Intermodal Project backs our objective to create competition between road and rail in South-West Queensland, lowering costs for producers and allowing towns in regional Queensland to take advantage of the opportunities that the Inland Rail project can provide,” Mr Szumowski said.

Current estimates indicate the entire Inland Rail project will be completed by 2027 with ARTC expecting early preparatory works, such as, geotech investigations, and utilities relocations will take to take place on the B2G section in 2022.

The Australian Government has committed up to $14.5 billion in equity to Australian Rail Track Corporation (ARTC) for the delivery of Inland Rail.

This will be supported by contributions from the private sector through the Gowrie to Kagaru Public Private Partnership and funding from the ARTC. The planned Inland Rail alignment in Queensland will pass to the east of Goondiwindi and extend via Gowrie to the Port of Brisbane as its northern terminus. Image: ARTC