ADDITIONAL capacity for Australia’s mammoth grain-export task now under way is expected to become available before the year is out at two sites in South Australia.

One is the T-Ports facility now under construction at Wallaroo on the Yorke Peninsula, and the other is the berth at Port Pirie which was being used by ADM and has been out of action since last year.

The operation of both will add further appeal to SA as the Australian state which traders say has the most attractive elevator margins.

What that means is that exporters are paying less to get grain on to ships, and can therefore afford to pay more money to growers and traders holding grain up-country.

SA already has nine functioning bulk export ports, six owned and operated by Glencore’s Viterra, plus one each for Cargill and Linx in Port Adelaide using mobile shiploaders, and T-Ports at Lucky Bay on Eyre Peninsula.

ADM in 2019 opened a bulk accumulation site at Abattoirs Road, Port Pirie South, and the US-based company was using the public berth at Port Pirie.

It is owned by the South Australian Government, and leased to Flinders Ports, and has been out of operation since mid-2021 for remediation works.

“It is to do with dust suppression, as you can’t export through a non-sealed export berth,” a spokesperson for Flinders Ports said.

It looks like the Pirie berth will be back in operation to ship grain in the tail end of 2022-23 (Oct-Sep).

Port Pirie South is the only bulk site ADM owns and operates in Australia, and has been receiving grain for outturn to domestic customers and other SA export terminals.

“Despite the challenge of not shipping through Port Pirie this shipping season, ADM continues to enjoy and appreciate the loyal support of the Upper North grain-growing community,” ADM national accumulation manager Damian Bradford said.

ADM has been shipping out of other SA ports while Pirie is out of action and, like all Australian exporters, uses a number of ports owned by third parties to get its grain shipped.

“ADM has actively supported all the main bulk handlers in South Australia.”

“It will be good to recommence shipping from Port Pirie in the future.

T-Ports is building its second port facility in SA at Wallaroo on the Yorke Peninsula, where Viterra already has two terminals, one at Wallaroo and the other at Port Giles.

Construction at T-Ports’ Wallaroo site is progressing well, and first grain is expected into the site at harvest this spring.

The added capacity means that SA appears to be ahead of the game in terms of flexibility, which more than make for the fact that only two of its ports, Viterra’s Outer Harbor at Port Adelaide, and Port Lincoln, can fully load a panamax.

As Mr Bradford has indicated, the competition has benefits for growers in accumulators’ drawing zones. 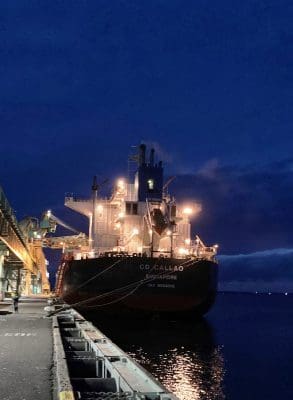 “Grain producers in the region have experienced the benefits of competition in the storage and handling space, and are taking a long-term view in supporting the bulk handlers in the area.”

However, the benefits of SA competition are reaching a long way north, south and east.

Trade sources have told Grain Central that SA bids have been pulling grain from as far afield as Brewarrina, near the Queensland border in NSW, and the Coonamble and Nyngan districts in north-central NSW.

Some grain from the Wimmera and Mallee which has traditionally been exported or processed within Victoria, has also headed west, and domestic and export markets in Adelaide have become big users of grain from the NSW Riverina.

Robinson Grain is one of the major traders active in central NSW, and its general manager Adam Robinson said pulses had been heading west or south rather than east.

“A lot of faba beans were going to Adelaide from the Central West, and to Portland too, because there just wasn’t that capacity of containers…to take that product to take into Egypt,” Mr Robinson said.

“The values there have been so high, but that’s being impacted now by the high cost of fuel.”

Wilken Grain trader Andrew Kelso said SFW wheat, which became evident in NSW after rain at harvest, has been the big mover into SA markets.

“There was plenty coming out of western NSW at harvest, and from western Victoria too.”

“It was relatively cheap to buy, and it worked well.”

Grower groups including Grain Producers Australia (GPA) and their members have been keen to point out that prices paid to growers have fallen seriously short of export parity.

“Currently, the major supply chain constraint, as we understand it, is about getting the harvested grain to ports in order to actually export the crop, not at the port terminals,” GPA chair WA grower Barry Large said.

“With local supply chains being tested by a record 62-million-tonne crop like never before, so too is our international competitiveness and ability to reliably and efficiently supply our grain-buying customers and export markets.”

Mr Large said the disparity between local grain prices being offered to growers and the  international prices was of concern to producers.

“While local input costs such as diesel, fertiliser and chemical seem to keep pace with global supply and demand factors, there’s a serious shortfall in the prices being offered for the grain we ultimately produce.

“These input prices were already at record highs before the Ukraine conflict started and have continued to rise – but this pricing dynamic is not being reflected with local grain prices.

“This pricing shortfall is causing great angst for Australian producers and raising further questions about the operations and transparency of the Australian grains market.

“This is why GPA implemented a project during the last harvest to assess these competition issues, interviewing a comprehensive range of industry participants and stakeholders to gauge their views and gather evidence on these matters, as requested by Minister Littleproud.

“Among a range of serious issues, this work found that about 25Mt of grain is expected to be exported from the last harvest at a $50-per-tonne discount, which equates to a $1.25 billion loss to growers.

“We need to know why this shortfall is happening and take steps to fix the core issues.

“That’s why GPA is calling on the Federal Government to approve an inquiry by the Australian Competition and Consumer Commission, to investigate these serious competition issues with a proper examination of the Australian grains market.

“This proactive study would use the ACCC’s special investigative powers, including the ACCC’s Agricultural Unit, to analyse these problems thoroughly and make informed recommendations that can deliver reforms to improve transparency for growers and optimise competition.

“This position is shared with GrainGrowers Ltd and this analysis hasn’t been done properly since the market was deregulated in 2008, so this work is now seriously overdue.”

The other Australian mainland states bulk grain loading terminals are listed below;

Queensland has four, three owned by GrainCorp terminals and one owned by Wilmar’s QBT.

Western Australia has five export terminals, with only Bunge’s Bunbury facility not owned and operated by CBH Group.

Victoria has two GrainCorp and one Emerald terminal, and Riordan Grain Services operates mobile ship-loaders at two ports, with the Port of Portland operating a third.

With the exception of GrainCorp’s two ports in Central Queensland, where the growing season was less than ideal, all are fully booked for coming months.