SOUTH Australian Government approval of an amendment to the Public Environmental Report (PER) for the Port Spencer project means work at the Eyre Peninsula (EP) site can start as early as next month.

The PER amendment removes the storage and export of iron ore component from the Peninsula Ports Pty Ltd (PPPL) project, which is being reconfigured for grain storage, handling and export, with potential to include other commodities in the future.

Granted by Minister for Planning and Local Government Vickie Chapman, the approval means the facility remains on track to receive grain from the 2021 harvest, despite a six-month delay to commencement of works.

“The development approval that has been issued is subject to a comprehensive set of conditions to ensure construction and operation of the port facility proceeds in an orderly fashion and in a manner which minimises impacts,” Ms Chapman said.

“Before construction starts, Peninsula Ports is required to provide final plans for all structures, along with the associated management and financial arrangements necessary to minimise impacts on the coastal and marine environment, and upgrade of the access road to the site from the Lincoln Highway.”

The development approval calls for on-site works to start within two years and finish within five years.

The amendment follows Peninsula Ports’ purchase of the land from Centrex Metals in June 2019.

With capacity for up to 800,000 tonnes of grain, Port Spencer will have the largest at-port storage on EP, and will add shipping slots to Australia’s peak grain demand period of December to March. 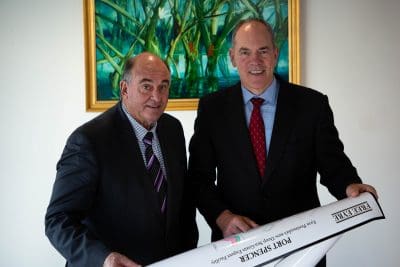 “When complete, Port Spencer will be one of two deepwater ports in the region, enabling large Panamax vessels to be loaded efficiently, cost effectively and largely irrespective of weather conditions.

“The Port Spencer facility will provide the opportunity for grower ownership and control of critical grain-supply infrastructure.

“It will also have potential to manage other commodities, but this remains a long-term consideration and would need to be compatible with the primary purpose of clean, green local grain export at the site.”

The project will create up to 150 jobs during construction, and a further 20 permanent local operational jobs.

Operational staff numbers are expected to peak at 80 staff during harvest.

An Indigenous Land Use Agreement (ILUA) supporting the development of the Port Spencer facility has been signed between the Barngarla Determination Aboriginal Corporation (BDAC) and Peninsula Ports Pty Ltd (PPPL).

The ILUA recognises the Barngarla Community’s traditional ownership and cultural connection to the land and sea, and lays the foundation for working together to deliver the Port Spencer project.

The agreement will enable the Barngarla people to share ownership in the facility and create the basis for the future development of an indigenous ranger program in the region.

PPPL will be working with the Tumby Bay Council to ensure access roads to the port will be maintained without ratepayers being disadvantaged.