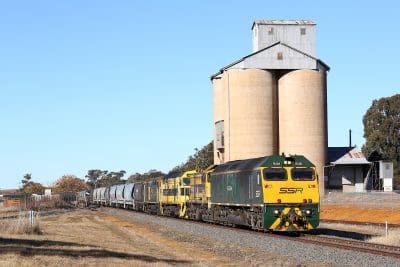 Almost all of SSR’s diesel fleet, including the RL-Class, a 49-Class and two 442-Class locomotives pictured, will not comply with proposed NSW EPA emissions regulations: Photo: SSR

HEAVYWEIGHTS in the New South Wales grain and rail transport business have joined forces in an alliance which is pushing for a rethink of proposed changes to regulations governing locomotive emissions.

Known as Save Our NSW Grain Lines, the alliance is lobbying the NSW Environmental Protection Authority (EPA) in order to enable existing rollingstock to be used past 2025 on the following regional branch lines:

Combined, the lines cover around 500 kilometres.

In bumper years, they can handle up to 500,000 tonnes of grain, including a significant tonnage bound for bulk export via Newcastle and Port Kembla.

The draft NSW EPA environmental standards on rollingstock operators relate to diesel and noise emissions, and are attached to Environment Protection Licences (EPLs) to be phased in between May this year and 2025.

A spokesperson for the NSW EPA said proposed licence requirements for rollingstock aim to reduce impacts on local air quality and protect communities from noise.

“These seek to balance economic and operational impacts with environmental benefits,” the spokesperson said.

“The EPA is currently considering feedback from the rail industry before finalising the licences.”

The alliance and its members claim the new regulations will add $5-$15/t to the cost of grain by forcing an additional road-transport leg to its journey to market.

“This would be a cruel blow to farmers, and the local communities they help support, attempting to recover from drought,” Save Our NSW Grain Lines said in a statement.

“Government needs to be acutely aware of this broader pricing dynamic.”

Older locomotives can be adapted to meet the new guidelines by retro-fitting emission kits, but the alliance said these were prohibitively expensive, heavy, unavailable or impossible to fit, given limited room in engine bays.

Of all the alliance’s members, Southern Shorthaul Railroad (SSR) will be hardest hit by the proposed changes to regulations, with only two of its 63 locomotives meeting the proposed requirements for emissions.

“Industry is of the view that existing locomotives need to be ‘grandfathered’ and not have these limits applied to them,” SSR director Jason Ferguson said.

“These existing locomotives need to have no end date applied to how long they operate for.”

The alliance said the return on investment on a new diesel locomotive, with a price tag of around $6 million, was 25-30 years.

“Without long-term certainty around government environment policies, it is commercially unviable for rail-freight operators to invest in expensive bespoke lightweight rollingstock,” the alliance said.

“Based on our interpretation of proposed new NSW EPA environmental standards for rollingstock, half of these older locomotive classes will be forced to cease operations by 2025, with the rest to go by 2030,” the alliance said.

G-Class, or 81-Class, locomotives were built in the 1980s and haul containers, grain and other material.

The alliance said they are unlikely to meet the proposed draft EPA environmental standards.

“This will mean that many of the existing locomotive fleets will need to be withdrawn from traffic from 2025 onwards,” Mr Ferguson said.

“This will increase the cost of freighting grain on average by $13-$15/t.”

These companies, as well as lessor CFCL Australia, see the revised NSW EPA standards as having ramifications for national rail operations. 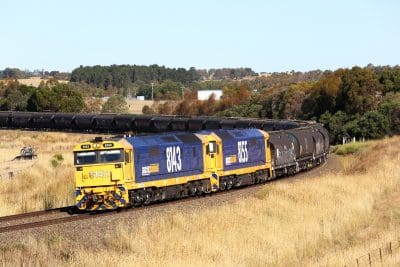 Locomotives including PN’s 81-Class fleet will fail to comply with proposed new regulations on emissions in NSW. Photo: PN

Regional branch lines include sections of track with a maximum locomotive axle load of 17t.

This precludes most modern locomotives, which have axle loads exceeding 21.5t, but comply with the noise and exhaust emissions regulations proposed by the EPA.

The alliance said enforcement of proposed regulations would shift the grain-freight task to road, with the lengthier legs including Hillston to Barellan, a round trip of more than 320km, and 280km from Tottenham to Parkes.

In bumper grain years such as 2016/17, it said this could result in an additional 12,500 B-double equivalent return truck trips, and a 500pc increase in carbon dioxide-equivalent emissions when compared with the locomotives they would displace.

“This is a perverse outcome.”

Save Our NSW Grain Lines said increased truck movements would fly in the face of the NSW Government road-safety strategy, and the closure of lines to existing rollingstock will cause job losses for train drivers and seasonal silo workers.

The alliance said it was not aware of any regulatory impact statement having been prepared in relation to proposed EPA environmental standards for rollingstock.

“Hence, our alliance has been forced to undertake some of this critical work — analysis which should have been conducted by government as part of any policy reform process.”

The alliance says the new EPA standards will cap the maximum “passing noise” of rollingstock at 85 decibels, 5dB below typical lawnmower noise.

“The stated EPA goal is to reduce noise of rail freight operations even lower to 65dB between 7am to 10pm and 60dB between 10pm and 7am.”

The alliance said this was equivalent to normal conversation noise, and it is expected to seek noise exemptions on a number of grounds.

These include freight-train noise, including “wheel squeal” from grain wagons, being less of an issue in rural locations.

“One of the best ways for government to reduce net greenhouse-gas emissions, diesel-particulate matter, road accidents and fatalities, traffic congestion, road wear and tear and noise is to support more freight on rail.

“Furthermore, numerous government transport plans and strategies – notably the NSW Freight and Ports Plan and National Freight and Supply Chain Strategy – have targets for more freight to be hauled by rail.”

The EPA continues to receive around 190 complaints per year about rail issues from the community.

Fine-particle emissions from diesel exhaust, such as from locomotives, have been declared a carcinogen by the World Health Organization’s International Agency for Research on Cancer.

A joint study by the EPA and the rail industry found local air quality can be improved through reduced air emissions limits from locomotives.

The EPA has undertaken significant consultation with the community and rail industry over the past six years on reforms to the environmental regulation of rail activities, which will make a difference to communities affected by noise and air pollution from diesel freight trains, and bring the industry into line with international standards on air emissions.

The phase-in period currently under discussion is over 10-years and has been developed to minimise the impact on industry and gives them the time to implement whatever they need to.

The new regulations have stemmed from the EPA’s 2016 Diesel Locomotive — Fuel Efficiency and Emissions Testing report and subsequent documents.

Save Our NSW Grain Lines signatories are: