AN INTERMODAL terminal at Ultima has officially opened this month to bolster the logistics capabilities of the Mallee region of north-west Victoria. 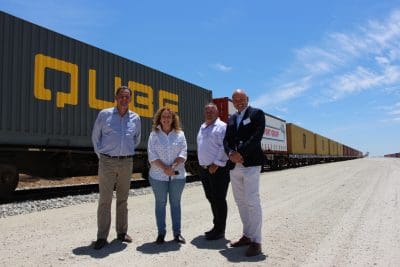 Victorian Minister for Ports and Freight Melissa Horne meets with stakeholders at the opening of the QUBE Ultima Intermodal Terminal.

Operated by QUBE, the terminal is located just west of Swan Hill, and has been operational since the middle of the year.

It is being used to carry containerised hay, grain, cottonseed and other commodities to Victorian export terminal.

It is currently being serviced by two trains per week, which is expected to increase to three or four next year.

The QUBE Ultima Intermodal Terminal has partly been made possible by the recent $23M  Manangatang freight-line upgrade, which includes new sleepers and ballast that will allow rolling stock to take goods to port more safely and efficiently.

Pentarch markets Australian oaten hay, cottonseed and other grain internationally, and the Western Australian company has said the Ultima terminal will help it supply markets in China, Japan, South Korea and Taiwan.

The terminal sits on a privately built spur line, and has been used to dispatch containerised wine and hay for export.

With the drought boosting New South Wales’ call on Victorian grain, trade sources have said the site is not expected to export wheat or barley before next year’s winter-crop harvest.