SA harvest delivers 101,243t to Viterra in week to Sunday

MAJOR SOUTH Australian bulk handler Viterra has received 101,243 tonnes of grain in the week to Sunday, with 61 per cent delivered into sites in its Western region. 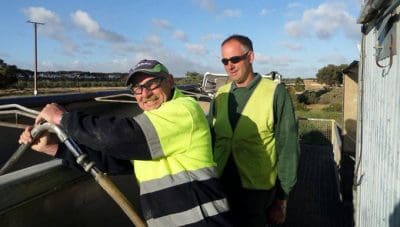 Across the three-region network, 17 sites took in their first loads last week, up from eight sites in the previous week.

“So far, grower sentiment is positive, and with the majority of deliveries comprising of barley, there have been lots of opportunities for growers to boost prices with our barley dynamic binning,” Viterra Western region operations manager Nick Pratt said.

Dynamic binning was introduced by Viterra last harvest on wheat, and is available on barley also this harvest.

It provides growers with the chance of accessing higher grades if their load falls just outside receival specifications, and is available for ASW1, APW1, H2 and H1 wheat and Malt1 barley grades for Planet, Scope, Spartacus and Compass varieties, as well as BAR1 (previously F1).

“Our Snowtown site has been the preferred delivery location for growers from a large surrounding area,” Mr Tansley said.

“We are currently increasing storage and segregation capacity at the site with two new bunkers that are near completion.

“In the past week, we have also loaded three trains in the Central region, bound for domestic markets.”

Sites in the Eastern region took in their first loads last week, with Monarto South and Murray Bridge receiving loads on Friday.

Monarto grower Tyson Paech kicked off the season’s deliveries in the east for the fourth year running, delivering to Tailem Bend last year and Monarto South in the previous two years.

Delivering into Monarto South on behalf of the family business Inglebrae Holdings, Mr Paech said the first load of Compass barley came from his better-performing paddock on the property’s higher country, and made malting grade.

“I’ve also started reaping peas — again from one of my better-performing crops — and the quality is looking good.”

Viterra Eastern region operations manager Jo Klitscher said while deliveries in the Murray Mallee will now start trickling in, the region is still a couple of weeks away from hitting full pace.