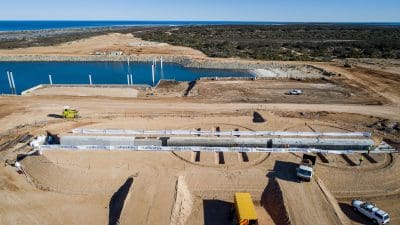 T-PORTS facilities on South Australia’s Eyre Peninsula are on track to open in October for their first commercial grain receivals, with the start of silo construction at the Lucky Bay port site, and early commissioning of the T-Ports transshipment vessel scheduled for next month.

T-Ports CEO Kieran Carvill said the company’s Lock and Lucky Bay bunker sites were close to being ready for harvest deliveries, with only a few minor tasks still outstanding.

“We are excited to be able to open the sites in October for grain receivals,” he said. 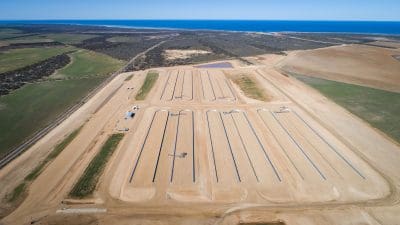 “Construction is complete and now we are awaiting connection to mains power with SA Power Networks, with final IT systems to then be installed in coming weeks.”

Mr Carvill said more than 4500 tonnes of off-farm grain was delivered to the Lock site in April as part of its commissioning process.

“This grain was purchased through ADM and will be transported to Lucky Bay when required for export.”

The Lock site has a storage capacity of around 140,000t site in six bunkers, while Lucky Bay has 10 bunkers which will enable it to store 360,000t.

Mr Carvill said T-Ports was talking with major grain traders about posting prices for Lock and Lucky Bay deliveries, and he encouraged growers to ask for a T-Ports option in their contracts.

“We know growers need to see pricing at site before contracting, so we ask them to speak with their grain marketers about this and request a T-Ports option on contracts, subject to approval before harvest.”

At the port, concrete is being poured for the foundations of the three 8000t silos, the major silo tunnel floor and walls have been poured, and the site is being prepared for the pouring of all three silo slabs.

“Next month, Ahrens will move on to the site to construct the silos,” Mr Carvill said. 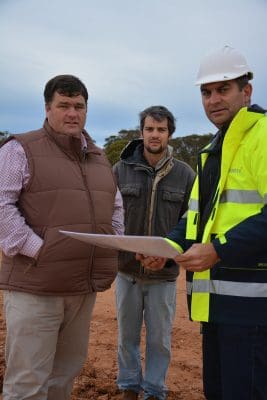 A road-intake building is also to be built at Lucky Bay.

“Ahrens has ordered the required equipment and has begun construction of various items at its own locations, which it will then transport to Lucky Bay.”

The Lucky Bay port site will be able to receive 1000t of grain per hour, while out-turn on to the transhipment vessel MV Lucky Eyre is expected to be around 1500t per hour.

The port will be completed by December and ready to load vessels by January or February.

This equipment is being supplied by a range of companies including Australian manufacturers, and is currently being installed by ZPMG and CCCC in Shanghai.

“Early commissioning of the vessel will take place during August, with the ship due to arrive in Australia before harvest.”

Mr Carvill said conditions in Spencer Gulf have been factored into the building of MV Lucky Eyre, which will load ocean-going vessels five nautical miles off the coast.

The vessel will be able to operate in wind speeds of up to 28 knots and wave heights up to 2.5 metres.