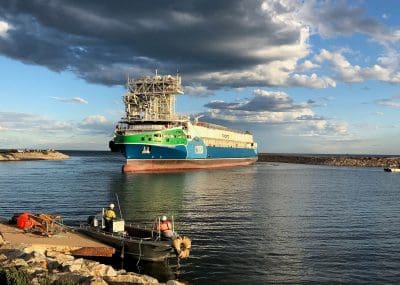 THE CUSTOM-BUILT vessel which will transfer grain from T-Ports’ Lucky Bay terminal to bulk carriers at anchor has arrived in South Australia’s Spencer Gulf.

Dubbed the MV Lucky Eyre, the vessel and its ship-loading conveyor are now undergoing dry commissioning, where systems are run through without grain.

This will be followed by wet commissioning, which involves grain being run through the system, and then performance testing, where the equipment is tested at its full designed capacity.

Last week, portside silos at Lucky Bay were commissioned with grain, and barley and wheat will both be tested through the wet-commissioning stage.

The MV Lucky Eyre will load grain from the port and transfer it to an ocean-going vessel – up to Panamax size – waiting in deeper water five nautical miles out at sea.

T-Ports has published its first shipping stem, which indicates ADM Australia will load 7200 tonnes of wheat and 21,500t of barley on to separate vessels next month.

Grain Central understands the grain is destined for end use in the domestic market ex Brisbane.

MV Lucky Eyre was built in China, and sailed to Australia in January.

It stopped in at the northern New South Wales port of Yamba to undergo vessel importation and customs formalities.

South Australia’s dominant bulk handler is Viterra, and it is busy outturning South Australian grain for domestic and international customers.

Its largest single rail outturn, a 100-wagon train loaded with barley from Viterra’s Crystal Brook, Gladstone and Snowtown and Gladstone sites, has recently been completed, with the grain to be consumed by feedlots in eastern Australia.

Viterra operations manager Michael Hill said this was the first 100-wagon train to be loaded by the company, and effectively doubled the size of a typical rail movement. 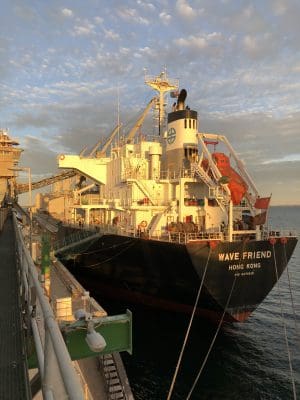 “We have around 40 buyers in the Viterra system purchasing grain for the domestic and export market, and we’ve seen a significant increase in shipping and rail outturns compared to this time last year.

“We’ve outturned close to 2 million tonnes (Mt) since harvest started in October, around 1.2Mt of which has been shipped.

“In addition to the 100-wagon train, we’ve also loaded a further six domestic-bound trains during the same week from sites in our Central region with wheat, barley and canola.

“It’s a huge positive to see grain from our state in such high demand, with a number of buyers in our system sourcing South Australian grain for the first time.

“Growers using the Viterra system will benefit from having greater options from the multiple buyers when they choose to sell their grain.

All six of Viterra’s port terminals across the state are loading vessels over March and April with wheat, barley and canola headed to a range of domestic and export markets.

The business is continuing to outturn by road to 85 different end-use destinations across the country as well.