THE MARKET for bulk-grain storages is set to be tested with the listing this week of Viterra’s site at Millicent in South Australia’s south-east. 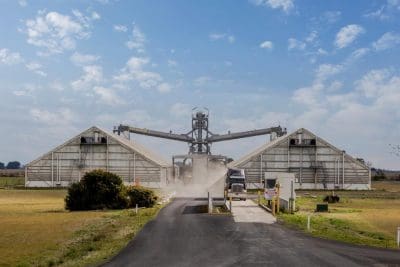 Viterra’s Millicent site is for sale by expressions of interest. Photo: CBRE

The listing was flagged last month, when Viterra announced its was consolidating its receival network by permanently closing 17 sites across South Australia.

Millicent was one of six which operated last harvest, and was singled out at the time of the announcement, as the only site which would be listed as a going concern.

In a statement to Grain Central, Viterra said the future of the 16 other Viterra sites will be considered on a case-by-case basis.

“No decision has been made regarding the sale of further sites.”

CBRE Agribusiness agents Phil Schell and Angus Bills have been appointed to negotiate the sale of Viterra’s Millicent complex, which has a total grain-storage capacity of 140,000 tonnes.

Mr Schell said the property is held under two titles, and was for sale in its entirety, or as two separate offerings, including the main site and the silo site.

“Passive investors will also be interested in the leasing opportunities the storage space offers, potentially storing feedgrain for supply to local dairy and beef livestock operators.”

Millicent is located in a mixed-farming district 160 kilometres north-west of Portland in Victoria, and 412km south-east of Port Adelaide.

Viterra said the Millicent site was being listed for sale as an operational site, and any specific details will be negotiated with potential buyers.

The Millicent facility is being offered for sale via expressions of interest which close on 29 August.