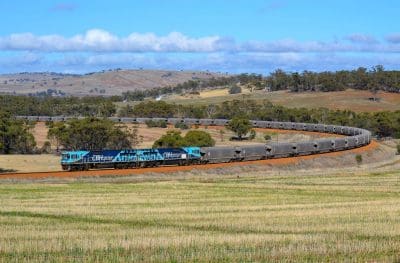 Watco has been working with CBH Group to improve its grain-to-port capacity. Source: Watco Companies

WATCO’S largest customer in Australia, CBH Group, is also Australia’s largest co-operative and a leader in the Australian grain industry.

They have operations extending along the value chain from grain storage, handling, transport, marketing, and processing.

Its storage-and-handling system currently receives and exports around 90 per cent of the Western Australian grain harvest and is regarded as one of the best in the world.

In February 2019, a small group, comprised of US and Australia team members, formed a taskforce to identify potential solutions and satisfy the primary objective of increasing grain to port transits.

CBH provided the team with several objectives that included the following areas of interest:

After months of research, the team was able to create a new rail-operations plan, along with exposing key business intelligence metrics that enable field crews to manage day-to-day operations more effectively and efficiently.

Some of the challenges CBH faced were direct results of simply not knowing the following key metrics of their daily activity including rail-network volume and how to maximise, train-cycle times and how they can be reduced/improved, and crew planning and how to avoid unwanted wait-time.

These consolidation efforts facilitated the creation of multiple online interactive dashboards and reports, which can be directly accessed by the customer and Watco team members.

It enables Watco team members to proactively inform CBH of train cycle variances, based on trustworthy information, and adjust operation plans and schedules to increase grain-to-port.