FEDERAL and NSW transport regulators have moved to bring NSW road train rules into line with those already in place in Queensland with a regulation amendment that standardises the transport of cotton modules throughout the two states. 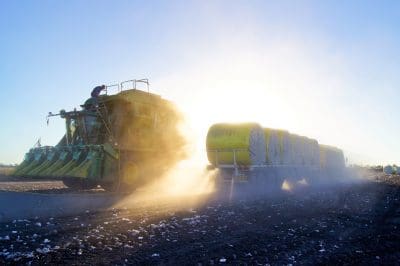 New rule allows the extension of road train trailers so they can legally transport six round cotton modules per trailer in NSW and Queensland. (Photo: Julie Reardon. Courtesy of Cotton Australia)

The National Heavy Vehicle Register (NHVR) has released the Multi State Class 3 Heavy Vehicle (Cotton Transportation) Dimension Exemption Notice 2017 (No 1), which allows the extension of road train trailers so they can legally transport six round cotton modules per trailer.

“The rules will allow NSW growers, like their Queensland peers, to transport cotton modules more efficiently and in a way that may reduce costs. Transport remains a significant input cost, so any efforts to create efficiencies is always welcome news for growers,” he said.

“The new rules have been particularly welcomed by growers and transport contractors operating on both sides of the NSW-Queensland border.”

Mr Murray said for transport operators, it was important to note that all extensions must be certified in NSW, effective immediately.

The latest regulatory amendment by the NHVR is part of ongoing efforts to harmonise regulations governing the movement of oversized agricultural vehicles across Australia.

As part of that process, Austroads produced a report last year titled ‘Future Challenges of Changing Agricultural Equipment’ that investigated the operation of agricultural vehicles on public roads in Australia and New Zealand.

Presenting the findings of the report to a webinar last Friday, lead author, SAF-Holland Australia senior product engineer, Adam Ritzinger, said the report had sought to identify the challenges of agricultural vehicles operating on public roads and determine what was needed to better suit the needs of the agricultural industry.

Mr Ritzinger said current policies governing the movement of oversized equipment on public roads varied widely throughout Australia, and some jurisdictions were “silent” on safety matters that were important such as braking requirements, machinery modifications, minimal levels of equipment and operator licensing.

He said he hoped the current NHVR project aimed at achieving national harmonisation would build on the findings of the report.

As part of that process, he urged operators of agricultural machinery and farm representative bodies to “get on the front foot” and make their views known to authorities.

“Get in touch with the road managers and jurisdictions in your state and tell them what your access needs are. Have that dialogue, otherwise they might develop something without your input and that would be a tragedy,” he said.

“Be aware of the rules and policies that are applicable to you and make sure the equipment you buy conforms with what is required. ‘Buyer beware’ needs to be taken into account at the purchase and equipment import level.

“Actively seek ways to reduce the risks of the operation.”

Mr Ritzinger said economic forces were driving farmers to acquire more productive equipment which was generally larger and heavier than before. 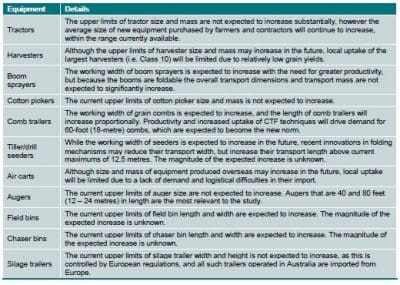 Table 1: Summary of expected changes in the size and weight of agricultural equipment.

The increase in equipment size presented new challenges for authorities drawing up regulations to accommodate the movement of agricultural equipment on public roads.

Mr Ritzinger said among their considerations were:

“This equipment has relatively high axle loads, gross masses and gross combination masses. There is the potential for the operation of these pieces of equipment to be operating laden on public roads. This is something road managers have struggled with in the past because there are concerns about the stability of those combinations when they are fully laden, particularly something like a chaser bin that might be loaded quite heavily. Is that stable on public roads? Can it meet the required levels of braking capability?”

“Another concern is the impact of high flotation tyres and vehicles fitted with tracks. It is all about the impact on the road surface.”

“Anything imported into Australia has to comply with Australian design rules, but they don’t accurately cater for instances where a vehicle, such as a tractor, might be towing something that is fully laden. How does that affect the braking performance?”

“Do they fit on the roads?”

Modifications to vehicles and equipment:

“The agricultural industry is well known for being innovative at modifying things. At the moment there isn’t a great understanding of how equipment is modified, who does the modification and has it been certified or signed off by someone with suitable qualifications.”