AN Australian-made fertiliser spreader controller has been recognised internationally, with a global engineering company opting to install the system on its popular range of spreaders. 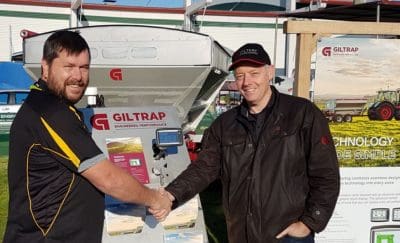 New Zealand-based agricultural engineering company, Giltrap, has recently announced it will be using the Farmscan Ag 7300 Spreader Controller for its range of fertiliser spreaders, which are sold internationally.

According to Farmscan Ag OEM manager, Clark Croucher, all the benefits offered by the 7300 make it one of the best compact spreader controllers on the market, a fact he said was recognised by Giltrap.

“The 7300 is a very universal spreader that can go on a wide range of agricultural machines here in Australia and internationally,” Mr Croucher said.

“It offers a user friendly manual operation or fully automatic rate map control with GPS connection, under the internal GPS system or surrendering to the Trimble or Tracmap GPS systems, with their own variable rate protocol.

“It has load cell capability to help farmers calibrate and maintain their correct product output with fluctuated densities, so the system will highlight when something is going wrong, such as a blockage.”

He said another major reason why Giltrap had chosen to work with Farmscan Ag was the flexibility it offered when it came to customising products.

“We don’t shy away from that sort of thing. It’s something we are well-known for. The size of the company means we are able to work with customers to create a tailor-made solution for their needs,” he said.
“Giltrap is a New Zealand-based company, but it sells throughout Australia, South America, South Africa and beyond, so we expect growth with this product based on that reach.

“Using the 7300 has given Giltrap customers access to features they probably haven’t had before, such as the mapping and variable rate capabilities.

The Farmscan Ag 7300 spreader controller screen is a large, 4.8-inch colour graphic touch display with simple functions and a smart warning system to alert the operator on critical conditions.

It displays live rates for each bin, which can be adjusted to varying soil types, maintaining the selected kilogram per hectare rate when a change in speed is detected.

Product rates and spread widths can be manually increased or decreased in pre-defined steps.

The 7300 has the ability to have multiple belts and spinner control, allowing any bin/spinner to be switched off or reduced to half rate at a simple selection, saving costly wastage in poor soils and at headlands.

The system has a USB facility, which allows the transfer of information between PC and controller, and it maintains a complete record of areas covered and products used for each paddock, plus overall totals of product tonnages and areas covered for the season.

Giltrap managing director Craig Mulgrew said Farmscan Ag was proactive in developing a bespoke control solution for the company’s spreaders and the result was very successful.

“It has worked out really well. The 7300 touch screen gives us the improved control and feedback capabilities that we have been looking for and customer acceptance of the product has been very good,” he said.