CASE IH’s autonomous concept vehicle (ACV) took centre stage at the company’s stand at this year’s Commonwealth Bank AgQuip Field Days in Gunnedah, NSW, drawing a stream of onlookers keen for a first-time look at the machine of the future. 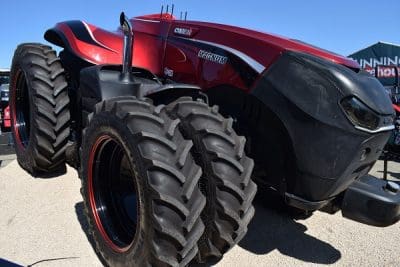 The cabless tractor, which has been showcased in Europe, the United States and South America, was shipped to Australia specifically for AgQuip and will be returned to the US soon afterwards.

Some years off from being a commercial reality, the driverless machine has the potential to revolutionise agriculture by operating autonomously with a wide range of field implements.

“Part of the reason for doing that is to try to understand what the customers think about autonomy and to kick off a market research campaign,” he said.

“We have had very good feedback, especially in Australia because of the tight margins customers see in this part of the world.”

Mr Lukac said the machine on display at AgQuip was a representation of what could be the future of farming.

It was a prototype vehicle created to test customer reaction and help Case determine the direction it will take with autonomous machines and applications in the future.

“It is about the technology we are putting in the tractor. We are representing what the technology could be, but we see autonomy as an evolution of auto guidance,” he said.

“So, this is the type of technology we can start to build onto our auto guidance systems in all our vehicles. It is not something that goes on a single vehicle. It is a technology that can be applied across the board.”

Mr Lukac said one of the main reasons for developing an autonomous program for agriculture was to address the concerns growers had with the lack of skilled labour.

“It takes a certain amount of skill to operate farm vehicles, but at peak times in the season you don’t always have the skilled labour available. This (autonomous machines) can allow you to automate the full system. You can put some lower skilled labour in the cab and execute the field,” he said.

“We are not going to be able to put out an entire portfolio of applications right away. We will start with certain applications. Automating a tractor is one thing, but a tractor doesn’t do anything by itself. It is the combination of the implement it has behind it.

“So, do we start off with spraying applications, tillage or seeding?

“Once we develop a portfolio of applications we can get a solution that works for more grain farmers.”

Mr Lukuc said there were three key control systems that allowed the ACV to operate autonomously.

“The vehicle has an advance command and control system. It is different to auto guidance. It uses a field boundary and it develops the mission plan on its own, not just for itself but for multiple vehicles, on how to drive and execute the field,” he said. 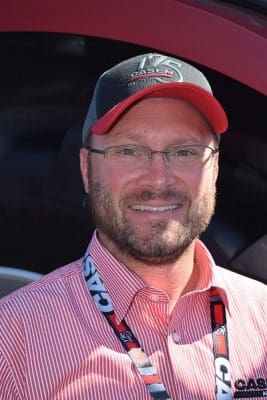 “We can use that to deploy an autonomous system. But maybe an early spin-off can be a path-planning application for a customer. We have already spun off automatic end-row turns with AccuTurn as part of the project.”

The second element was the radio communications and high band width that was needed to share information between vehicles and also to a remote command centre.

Third was the sensing and perception system that combined radar, lidar and cameras.

“You fuse that information together so the tractor can make decisions on what is ahead of it,” he said.

“It is a little more complicated than in the automotive industry. In an agricultural setting, (the autonomous vehicle) needs to be able to tell if a weed is an obstacle, if a weed is something it can drive over, how big that weed is, is it a weed or a branch? It could be a different answer depending on the implement and what it can do.

“It not only has to recognise an obstacle, it has to be able to detect things like depressions.

“It needs to understand that residue in the field is not an obstacle, but it might have to be able to identify a weed from the residue.

“We have to be able to classify what those different things are. It is a very complex situation.”

He said an operator could potentially supervise the activities of multiple machines via a tablet or desktop computer while completing other tasks, and a number of autonomous tractors could work together on the one task or on multiple tasks simultaneously.

“The ACV’s onboard system automatically accounts for implement widths and plots the most efficient paths depending on terrain, obstructions and other machines in the vicinity,” he said.