CASE IH has given its 140-series harvesters a serious makeover for the 2016 season with modifications covering the transmission and rotor drive through to the auger system and cabin layout.

The changes to the 6140 and 7140 models have been designed to make it easier to adjust the machines for different crops and field conditions. 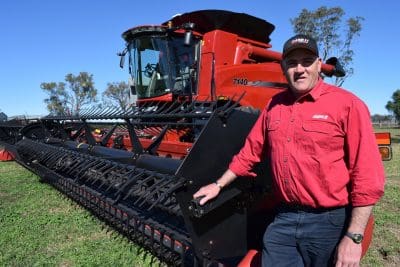 Tim Slater with a 7140 harvester

Case IH product manager hay and harvest, Tim Slater, said one of the key modifications was reverting from Case’s signature power plus hydro mechanical drive to a rotor belt drive.

“Rather than using the power plus drive, we go back to using a 3-inch wide rotor belt which is comparable to everyone else on the market,” he said.

“It gives us flexibility in the Class 7 market to have a rotor drive system the same as everyone else’s.”

Another new addition to the 140-series is a side-hill compensation feature which keeps the harvested material level on the cleaning system when the machine is off level from side to side.

“It is about maintaining even material distribution on the top sieve. Previously that was limited to the 240-series. It is something that is now available across the entire axial-flow range here in Australia,” Mr Slater said. 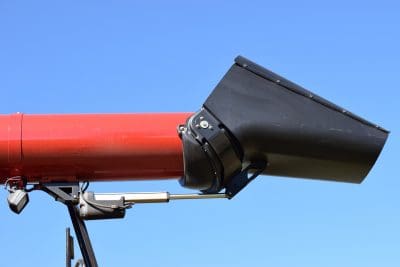 Another addition is a pivoting unloading auger spout that will not only be on the 140-series but all Case IH axial-flow combines in Australia from the 6140 to the 9240.

It gives the ability to adjust the throw of the grain coming out of the auger, creating up to another 60 centimetres of throw.

Mr Slater said a new 2-speed transmission had been incorporated into the 140 series this year.

“Moving away from our previous 3-speed mechanical change, we now have a 2-speed electronic shift which gives working speeds up to about 17 kilometres/hour in first gear and road speeds up to about 38km/hr in second gear,” he said.

“By reducing the gear stick, linkages and cables we previously had we reduce a lot of noise coming into the cab.

“The cab is consistent across all axial-flow combines. It is a luxury-spec cab with electric adjust mirrors, automatic temperature control, air-suspended seat available in cloth or leather, portable fridge under the seat.” 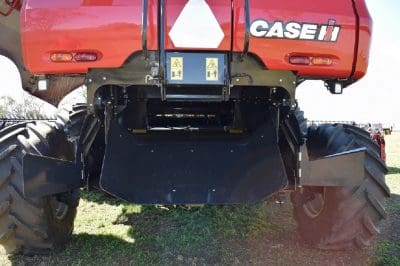 Another modification to the 140-series has been a fully redesigned residue management system.

Rather than a mechanically-driven spreader system, the machine now features hydraulically-driven discs which allow the speed and spread width to be controlled from the cab.

There is also a new mechanism that allows the residue management system to be swung out to give better access for cleaning and maintenance.

Two full width clean-out doors have also been added underneath so the operator doesn’t have to crawl under the machine to clean it.

These models, which make up Case’s most popular lines, still feature the power plus drive which allows the rotor to be reversed from the cab.

“The benefit of that is if you get a little overanxious and feed too much in, rather than breaking a rotor belt and get out and unclogging it you have the capability of reversing the rotor from the cab,” Mr Slater said.