MACHINERY dealers are expecting farmer buying activity to fire up again in February after the summer holiday hiatus, rallying on the back of a buoyant 2016 that saw tractor sales record their best result in over 30 years. 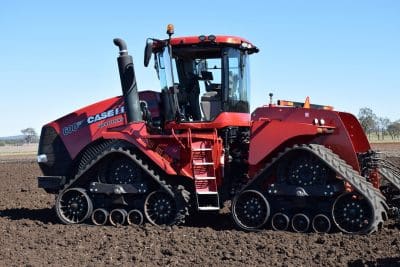 2016 was the sixth consecutive year that more than 10,000 tractors were sold on the Australian market.

Grain growers with coffers bolstered by a bumper winter harvest in many parts of Australia are driving demand for broadacre machinery as they reinvest part of the crop windfall in upgrades to plant and equipment.

Tractor and Machinery Association (TMA) executive director, Gary Northover, said sales of big ticket items such as tractors and harvesters had led the way in 2016 and he expected that to continue in 2017.

“We think the outlook is still positive. We don’t think it is a flash in the pan. There is still pent up demand out there. There is not a lot of used equipment around. Providing the weather does the right thing and prices don’t tank too far for the end product (grain), things should still be reasonable,” he said.

“The winter crop harvest has been strong, interest rates are still low, farmers are still looking for more practical ways to do the job and Australia is still seen as a sweet spot as far as manufacturers are concerned, so dealers are keen to do deals. That is all leading to opportunity for tractor guys.”

Mr Northover said 2016 had been the sixth consecutive year that more than 10,000 tractors had been sold on the Australian market.

“The last time we saw this happen was back in the early ‘80s,” he said.

Mr Northover said sales at the larger end of the tractor market in the over 150kW (200hp) bracket took a breather in December, down 17 per cent on the previous month but still in positive territory, up 9pc on the previous year.

“Overall, the year has been dominated by the volume of large tractor sales which has led to an increase of around 8pc on last year in dollar terms.”

Much of this activity occurred in Victoria and South Australia where a predominance of smaller “hobby” farmers was apparent. Victorian sales for December were up 31 on the previous month to finish the year slightly down on last year.

Mr Northover said combine harvester sales continued to grow for the third year in a row.

“It’s been six years since the last boom in demand and, combined with the record winter crops, suggests that 2017 could very well be another very strong year for the sector,” he said.

In north-west NSW, Kenway and Clark group sales manager, Kevin Traynor, said there had been a surge in demand for machinery late last year at harvest time as farmers geared up to bring in a massive winter crop.

“Up until Christmas we were run off our feet. It was the first time we have sold a tractor on Christmas Eve,” he said.

“Since Christmas it has become quieter. I suspect it is to do with the fact the harvest was late and a lot of people have gone on holidays. I’m hoping that in February it will ramp up again. In February we will get a rush on combines again.”

Mr Traynor said apart from tractors and harvest gear, one of the big movers up to Christmas had been tillage equipment.

“That has probably got a lot to do with the heavy crops that were around and people trying to manage the heavy stubble loads. The cereal crops were magnificent around here,” he said.

“We have sold a lot of Grizzly ploughs. There have been a lot of them retailed and still a lot more to come through. Equipment to handle the huge trash load has been our big mover this year.”

On the second-hand market, Mr Northover said dealers and resellers were reporting a significant shortage of used equipment stock across the board so prices for those considering trading up should be strong.

Michael Buck, owner of Buck Equipment at Goondiwindi in southern Queensland, who specialises in selling used machinery on-property, said there had been substantial activity on the used equipment market by people upgrading to later model, newer equipment. 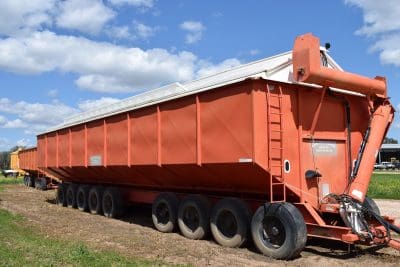 There has been substantial sales activity in second-hand grain-handling equipment.

Mr Buck said while it had been tough going in the second-hand market up to September 2015, the market had turned around and been strong ever since with monthly turnover for his business higher than anytime previously.

“We went to a level and it has been consistent since. That has been in line with how general confidence has been in that same period in the cotton and grain industries,” he said.

Mr Buck said prior to September 2015 there had been a disconnect between used values and new values.

“Used equipment had got left behind and new had risen. The exchange rate had eroded. All of a sudden we observed that people were going to buy a new header, tractor or self-propelled sprayer and got a new price and found it was considerably dearer than last time they had inquired,” he said.

“They then pushed back and went and found that used was well priced. It had been in the doldrums for quite a while and all of a sudden there was a surge in used activity.

“Now we are back to the point where if you see a quality used tractor, for example, it is going to be priced appropriately to what a no-trade equivalent machine is worth.”

“We have been seeing that for 18 months now. Prices for that sort of equipment seem to be holding, even in the off season,” he said.