NATIONAL Farmers Federation (NFF) workforce committee chair, Charlie Armstrong, has taken to task quad bike manufacturers who are threatening to withdraw from the market if they are forced to adopt stricter safety measures. 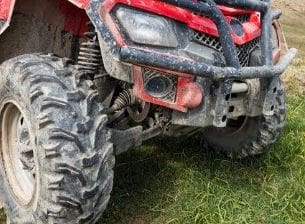 Honda and Yamaha have announced they will cease selling quad bikes in Australia should the Australian Parliament adopt additional safety measures recommended by the Australian Competition and Consumer Commission (ACCC).

The recommendations include the introduction of a mandatory safety standard and the fitting of operator protection devices (OPDs).

He said in light of the disclosure farmers should think twice about buying from these manufacturers.

“In a way, we welcome the announcements. Assuming both Honda and Yamaha follow-through on their withdrawal, Australian farmers will be safer without the danger that their products currently pose,” he said.

“So, if it means fewer deaths and crippling injuries, then it’s hard to feel troubled.”

Mr Armstrong said in making their decision to withdraw from the Australian market, the manufacturers relied on misinformation, such as American computer modelling, which they commissioned, and which they claimed said the ACCC’s recommendations would make bikes unsafe.

In doing so, they have dismissed the consensus of a range of professional bodies with no commercial interest in the matter, including:

“The announcement is reminiscent of the motor vehicle industry’s responses to other safety measures such as the introduction of the ANCAP safety ratings and requirement to install tractor roll-over cages.

“Each of these has proven, well beyond any rational argument, to provide indispensable safety advances.

“Any suggestion to the contrary would be inconceivable today. So, it’s easy to forget that when government was considering these initiatives, the manufacturers fought aggressively to defeat them.”

Mr Armstrong said the decision by Honda and Yamaha would leave a hole in the market.

“But the void will be filled by other vehicles and manufacturers who embrace safety and are as horrified as the NFF at the frequent reports of death, and serious injury relating to quad bike use. If this move saves just one life, then it will be worth it,” he said.

Mr Armstrong said Government regulation to improve quad bike safety needed to be supported by investment in education and awareness about farm safety.

“To this end the NFF supports the Coalition’s commitment of $3.5 million to the longevity of organisations such as Farmsafe Australia. We call on the Opposition to also commit to this investment.”

Mr Armstrong said quad bikes accidents were the largest cause of death and injury on Australian farms.

Since 2011, 130 people have been killed in quad bike related accidents. On average six people per day are hospitalised with injuries relating to what are arguably a farm’s most popular piece of equipment.