TRANSPORT rules for heavy agricultural vehicles are out of date and need to be overhauled urgently so Queensland primary producers can get on with the job of farming instead of being tied up in red tape, according to Queensland farmer representative body, AgForce. 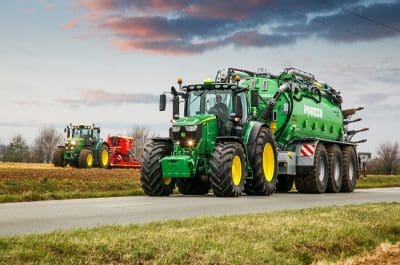 AgForce Grains Board director Jordan Anderson said regulations governing the movement of agricultural machinery on Queensland roads hadn’t changed for 16 years, while the modern machinery being routinely used on farms had grown in size considerably.

“AgForce welcomes the fact the National Heavy Vehicle Regulator is looking to streamline regulations by developing a single national notice, but it’s critical the new notice takes into account the size of machinery now and the machinery farmers will use in the future,” he said.

“Queensland farmers will continue to invest in machinery and equipment that improves their productivity and profitability, and the last thing we want to do is prevent them from adopting better farm practices because of antiquated transport regulations.

“AgForce is keen to work with state and national regulators to help farmers comply with complex transport regulations so they can focus on what they do best – growing high quality food and fibre for Australian and overseas consumers.”

Mr Anderson said AgForce had recently surveyed more than 100 Queensland grain growers and found many had machinery that was longer, higher or wider than current and potential limits.

“It was also disturbing to find a large number of growers surveyed were delaying upgrading their machinery because of the difficulties in complying with outdated transport regulations.”

Mr Anderson said AgForce wanted to ensure members could easily comply with regulations, rather than be stuck waiting months for approvals through unnecessarily bureaucratic processes.

“Our survey found growers were on average moving machinery 24 kilometres, usually between farms. Often farmers don’t know when they will need to move machinery and when it rains don’t want to be twiddling their thumbs waiting for a piece of paper,” he said.

“AgForce is seeking a system that actually relates to risk and acknowledges the difference between moving machinery on a deserted back road and travelling down a major highway.”

Mr Anderson said AgForce would use the survey data collected to comment on the National Heavy Vehicle Regulator’s soon-to-be released discussion paper and continue to put the case to governments that the current system needs to change.

“Transport can be up to a third of growers’ cost of production, so it’s vital that regulations across the country are streamlined, consistent and in line with modern farming practices,” he said.

A more detailed snapshot of the survey results and photos of oversized agricultural machinery are available via Dropbox at https://goo.gl/o9adFc