FIRST-TIME Western Australian grower users of the Integrated Harrington Seed Destructor (iHSD) are looking forward to adopting the latest developments with the technology for the upcoming grain harvest, as well as further improving their weed control, chemical use and soil nutrition through reduced burning. 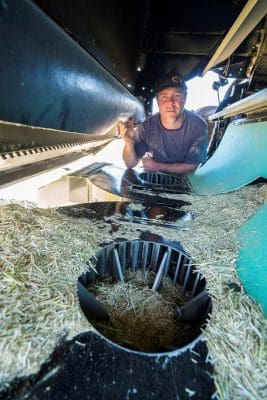 Nyabing grower Warrick Browne, pictured overlooking the hydraulically-driven cage mills as part of the Integrated Harrington Seed Destructor (iHSD) mounted at the rear of one of the family’s New Holland CR9.90 headers, says he believes the investment in iHSDs is a good long-term decision. (Photo: Evan Collis)

Comprising of two hydraulically-driven cage mills mounted within the rear of the combine harvester, the latest iHSD incorporates several enhancements centred around it’s cooling, chute design and hydraulics, all of which also will be updated in existing grower systems

Nyabing farming brothers Trent and Warrick Browne installed the iHSD in both of their New Holland CR 9.90 headers last season.

They crop 7600 hectares of their 9850ha property, ‘Chirniminup’, and leased land to an equal split of wheat, barley and canola, which is rotated with a pasture phase, while they also run 5500 mated ewes as part of a flock of up to 12,000 sheep.

Trent Browne said they were keen to maintain a low weed burden and ensure cost-effective chemical use, as well as to prevent significant nutrient loss from burning windrowed wheat stubbles.

He said the narrow windrow burning was costing them about $19/ha in lost soil nutrients, plus there was the labour cost of burning rows during an intensive two to three-week period.

Warrick Browne said while the upfront investment of two new machines fitted with iHSDs was significant, they believed it was a good long-term decision.

“While we only narrow windrow burned 25 per cent of the program each year, who knows what the future would hold. Would we be having to windrow burn 50 or 100pc of the program because of weed issues – and what would that have meant in terms of nutrient loss and its impact on the business,’’ he said.

The main weed targets for the Brownes are ryegrass and radish, the latter of which has shown some tolerance of herbicides in some cases.

“The iHSDs were certainly killing up to 99pc of weed seeds that were going through the mills,’’ Trent Browne said.

“We still had volunteers coming into this season from the loss over the rotors – enough for some grazing – but nowhere near as much as previously, and we just got them with our normal knockdown.

“We used to only windrow and burn the wheat paddocks, so with the iHSDs we are now getting (weed seed) control in every crop.

“We definitely noticed less volunteers in the pasture phase after barley.

“We can also now decide whether we swath spray canola or desiccate and harvest it, depending on the harvesting program as well.’’

With the enhancements to the iHSDs, he expected they would work really well and the new chute design would prevent any weed seed escapes.

“We are very happy that our suggestions were taken on board, to now move forward with the updates and to continue to look at R&D with the system,’’ he said.

At Moonyoonooka, Warren Treasure was one of the first in the country to operate an iHSD last season, fitted to his New Holland CR 8.90 header. 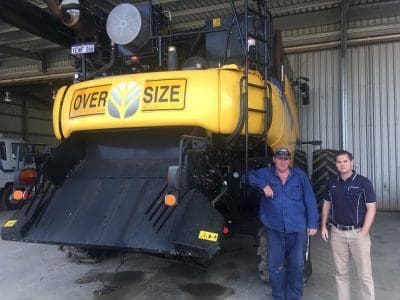 Mr Treasure, his brother Daniel and father Quentin crop most of their 2400ha property, ‘Appa Springs’, to wheat, barley, canola, lupins and some hay.

The main rotation includes two years of cereal followed by an oilseed or pulse break crop.

Radish and ryegrass have also been the main weed problems at ‘Appa Springs’.

“We have kept herbicide resistance at bay, but it is looming on the horizon,’’ Mr Treasure said.

He said previously they mainly burned windrows and carried out some croptopping to control weed seeds, but they wanted to cut down on burning due to wind erosion and concerns from their location close to Geraldton and the local airport.

“We mainly burned canola windrows and dirty wheat paddocks, but it takes a bit of time and if it’s one job that we can reduce, that will be good.’’

Mr Treasure said their main aim with the iHSD, however, was to reduce their reliance on chemicals and get control of weeds before they developed resistance.

Less spraying would also suit their proximity close to Geraldton.

“We could really tell the difference with the iHSD. It was harder to tell with the weeds because of the residual seed bank, but it was definitely noticeable with the less volunteers – and they were only from shedding or cutterbar loss because they were more spread across the paddock, rather than being in a concentrated strip.

“It was certainly noticeable against some neighbouring paddocks when we were melon spraying.

“Then a lot of our paddocks went in with no knockdowns, whereas we would normally go with a double knock. It was dry this season, but there were no volunteers there.’’

He said he believed the iHSD had also made their post-emergent spraying program easier this year.

“We have taken the view that we will take out what we can, and, if the odd one does get through, the iHSD will get it.”