THE risk of header fires has increased dramatically in the modern era where today’s sophisticated machines capable of fast, high throughput harvesting are running much hotter than their predecessors. 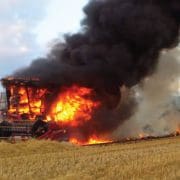 At the same time, there has been an increase in plantings of pulse crops which produce substantial quantities of combustible dust that makes them a much higher risk of triggering harvester fires than wheat.

It’s a volatile combination that has contributed to a spate of harvester fires throughout Australia’s cropping regions in recent years.

“Farmers are sowing more pulse crops than ever before, so there is more opportunity for fires,” he said.

“So, there is a lot more heat around the engines and exhausts and surface temperatures are approaching the flash point for dust more and more. There are more opportunities for embers to form.”

Mr Holmes said there were a number of options for farmers to reduce the risk of header fires.

“Cleanliness and hygiene are paramount. It is the most important thing to do,” he said.

“But there are plenty of stories going around where guys have just blown the machine down and then within half a box the machine is on fire. So, cleaning down is not the complete answer.”

Mr Holmes said that was why his company had looked into the option of fire suppression and had recently teamed up with John Sample Group (JSG Industrial) to develop a system for agriculture based on the fire suppression technology used in the mining and construction sectors.

He said they had developed kits specifically for harvesters that could be fitted to any make or model, including his company’s Case IH harvesters. 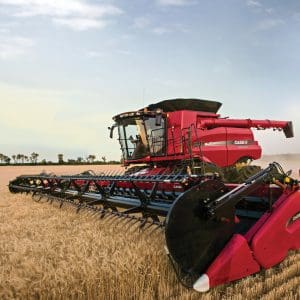 “It is linked to a 110-litre tank that is pressurised with nitrogen and is filled with 90 litres of water and one-litre of foam additive.

“The system we have has a ‘burn’ wire which runs around the high heat areas that need to be monitored. When the wire burns through it sends a signal to set off the suppression system.

“It gives peace of mind because it is automatically activated as well as having manual activation either in cab or out of cab. There is a total discharge time of just over two minutes.”

Another speaker at the Birchip Cropping Group field day, Horsham Hydraulics general manager, Richard Nagorcka, said his company had also responded to the heightened demand for header fire prevention solutions with the development of the Tornado Harvester Air Flow System.

“It has a hydraulically-driven fan that constantly blows down on the exhaust, muffler and turbos and some other spots that accumulate dust on the machine,” he said.

“We developed it in the middle of harvest last year when there were header fires in the area.

“We thought that constantly blowing air onto the machine would be the way to go, so we came up with this system. Because mounting it is different for different machines, we have different kits to suit them.”