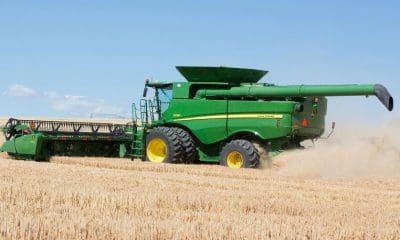 The company reported worldwide net sales and revenues increased 5 per cent, to US$8.287 billion, for the second quarter and increased 4pc, to US$13.912 billion, for six months.

“We are seeing modestly higher overall demand for our products, with farm machinery sales in South America experiencing a strong recovery. Deere’s performance also reflects the sound execution of our operating plans, the strength of a broad product portfolio, and the impact of our actions to develop a more agile cost structure. As a result, we have raised our forecast and are now calling for significantly higher earnings for the full year.”

Net sales of the worldwide equipment operations increased 2pc for the quarter and 1pc for the first six months compared with the same periods a year ago.

Equipment net sales in the United States and Canada decreased 5pc for the quarter and were down 6pc for the first six months.

Outside the US and Canada, net sales increased 14pc for the quarter and 13pc for the first six months, with no material effect of currency translation in either period.

John Deere’s equipment operations reported operating profit of US$1.111 billion for the quarter and US$1.358 billion for six months, compared with US$688 million and US$902 million, respectively, last year.

Company equipment sales are projected to increase about 9pc for fiscal 2017 and to rise about 18pc for the third quarter compared with the same periods of 2016.