CASE IH has unveiled its new series of large square balers to the Australian market. 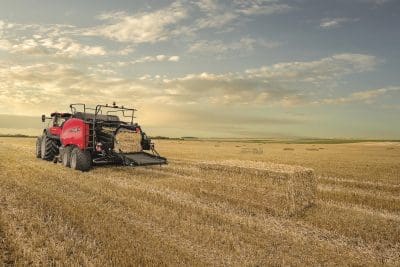 The Case IH LB434 XL series retain the features of the current LB434 units, while introducing a range of new attributes.

It is available to producers in two models: the LB434S XL (Standard) and LB434R XL (Rotor Cut).

“It all adds up to a unit perfectly designed for large-scale hay and forage operations with a lot of ground to cover and a short time to do it,” Case IH product manager for hay and harvest, Tim Slater, said.

In lengthening the bale chamber, bale density has increased by up to 10pc over previous models, with a more stable bale density in various operating conditions, and better bale shape.

The longer bale chamber also means bales exit the bale chute closer to the ground for a gentler drop, minimising the risk of twine breakages.

Structurally, the LB434 XL Series has been strengthened to accommodate the additional weight to the rear from the extended bale chamber, and the plunger has been upgraded to handle the higher anticipated loads from the increased density.

The overall width of the new models increases to 2.8 metres over the outside of the panels excluding the wheels, while the overall width including wheels and pick-up wheels remains under 3m.

The increased space between the side frame and the twine boxes helps to reduce crop accumulation and provides more space on the maintenance platform.

“Folding handrails have been redesigned to allow for more comfortable and safer access to the whole service area, and the new railings project further to the front of the machine to offer safer access to this area.”

Another innovation is the Active Bale Ejection System, with full and partial bale eject, which replaces the previous passive system.

In the new models, when bale eject is operated, the bale eject teeth – 10 in total – are actively driven into the bale, ensuring all teeth are fully engaged to positively drive it out of the chamber.

In another upgrade, more modern and brighter LED lights replace the previous halogen packages, and both models of baler are now ISOBUS Class 3 ready.

ISOBUS Class 3 allows the implement to take a greater part in ensuring it is operating at its best.

In the case of the LB434 XL balers, it allows the baler to command the ground speed of the accompanying tractor to have the units operating to peak productivity.