Next generation AXION 900 tractors on the way

CLAAS’s new generation AXION 900 tractors, which will be available to order in Australia and New Zealand in early 2018, feature more powerful engines, an optimised CMATIC continuously variable transmission and, for the first time, a choice of two operating systems. 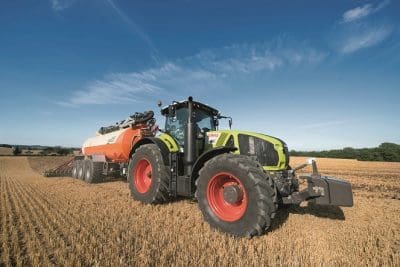 Released in 2011, the series has established a keen following among grain producers and contractors for its perfectly-matched engine and transmission, high fuel efficiency and ease of operation.

The Tier 4 engine includes a new variable geometry turbo that delivers optimum charge-air pressure according to the load and engine speed.

“All models are capable of transferring their full power from a standing start and at all forward speeds without a boost,” Mr Knowles said.

“In fact, 70 per cent of maximum torque is available even when idling.

“The advanced low-speed concept means the engine develops 18 per cent more torque than previously at a lower speed.

“This reduces fuel consumption in all field and transport applications.”

Further fuel savings are achieved by automatically reducing the idling speed from 800 to 650 rpm when stationary.

In the ECO mode, up to 95 per cent of the maximum engine output is transferred to the PTO shaft despite the reduced engine speed, allowing heavy implements to be operated at a lower engine speed.

All models are equipped with an upgraded ZF Terramatic transmission to match the higher output of these tractors.

“For example, the cruise control can be deactivated using the accelerator pedal and the driver can switch between two saved engine droop values simply by pressing a button.”

“The new CIS+ is an intermediate system that is aimed at customers who want greater convenience and efficiency but do not need all the functionality of the CEBIS system,” Mr Knowles said.

“It offers customers the option of using the CMATIC continuously variable transmission without the CEBIS system.”

“This system provides convenient operation of all the main functions using just the thumb and two fingers,” he said.

“The new software and intuitive operation offers many new functions for rapid and straightforward operation.

“For example, frequently-used tractor functions can be accessed simply by tapping the machine silhouette on the CEBIS touch display.”

Factory-fitted GPS steering and CLAAS TELEMATICS remote monitoring systems are available in all models and configurations.

All AXION 900 tractors have load-sensing hydraulics with an output of 150 or 220 litres/minute and release levers for all hydraulic couplings at the rear.

“The function buttons on the armrest and multi-function control lever can be configured for any of the spool valves,” Mr Knowles said.

“This reduces the driver’s workload, especially during combined operations, as there is less need to change hand position.”

In the CEBIS version, the driver can assign priority to any of the eight spool valves.

“The pre-set oil volume for the prioritised spool valve then remains almost constant even when other spool valves are in use,” Mr Knowles said.

“This prioritisation option is useful when operating equipment, such as hydraulic motors or pneumatic precision seed drills, that require a constant oil flow.

“An opening and closing ramp for each spool valve can also be defined in the new CEBIS terminal.

“This means the driver can specify how quickly a spool valve should deliver the maximum pre-set oil flow after activation, allowing hydraulic motors or smaller hydraulic rams to be operated more gently with less wear.”

All AXION 900 models are fitted with a universal (ISO500) tow hitch support and a six-way adjustable drawbar.

A pick-up hitch is also available.

Other practical options include up to 20 LED working and road lights, wide-angle mirrors with two separately adjustable fields of view, a compressed air connection mounted near the left-hand steps and a removable tool drawer with telescopic runners.

“The drawer is big enough to hold a conventional standard toolbox, allowing the on-board tool kit to be changed to suit different types of work,” Mr Knowles said.

“Another useful detail for practical day-to-day use is the easily accessible, external battery terminals on all models.

“This means that the tractor can be used as a power source for other jobs, such as in-field refuelling.”