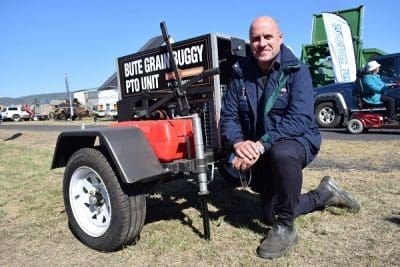 The portable unit takes the place of the tractor in powering the PTO for unloading auger bins.

Bute Engineering CEO and manager, Kent Paterson, said the unit, which could be towed behind a ute, was designed to take the pressure off farmers during the busy harvest period.

“We have found a need for this buggy. Farmers nowadays are rushed for time at harvest. This is specifically built for emptying auger bins. For example, if you have 10 auger bins and two tractors with PTO, you can’t be everywhere at once,” he said.

“You simply pull up in front of an auger bin and connect the PTO. It has a 35 horsepower motor. You start it up, put it in gear and empty the auger bin, then move onto the next one.”

Mr Paterson said the buggy was fitted with tail lights so it could be registered for road travel.

“The distances between farms is getting greater these days. You don’t want to run a tractor between them. You can tow the buggy between farms with a ute at 80 kilometres/hour, which gets you there quickly.”

The buggy, which is made at the company’s factory in Bute, SA, has undergone 12 months of testing and is now commercially available, retailing at $9000 plus GST.