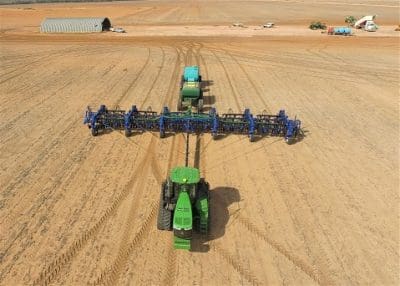 The Ground Breaker Precision Planter in use on Brad Jones’ farm at Tammin, WA.

After being awarded the Piper Award for Innovation in 2016, the Toowoomba-based company has gone on to win the 2017 Piper Prize for Innovation to further assist the development and commercialisation of the planter.

“The precision planting system was originally designed for planting summer grain crops in Queensland, However, the planter has been modified to solve the growing issues associated with planting canola in Western Australia, the most popular rotational break crop,” Ground Breaker CEO, Scott Farquharson, said.

“The planter uses a patented tyne system rather than a traditional double disc opener that you see on most growers’ seeding bars and applies the world’s leading precision technology.”

COGGO chair, Chris Wilkins, said the prize was awarded to Ground Breaker Precision Agriculture so they could further develop the planter to improve the efficiency of sowing grain crops, with the initial focus on canola.

“Canola is the preferred and the most widely grown break crop in Western Australia, used for its disease and weed management properties under crop rotation,” he said.

“Grain growers in Western Australia face high costs per hectare for hybrid canola seed, which increases the financial risk of growing canola.  This high cost has reduced the uptake of the latest varieties of canola in the drier parts of the wheatbelt.

“We would expect the seeding rate and planting costs of canola in WA to be significantly reduced, by as much as 50 per cent using this technology.

“This could allow for a rapid uptake of the latest and best varieties of canola, while reducing the risk in the farming system.”

Another advantage of using the Ground Breaker precision planting system is that canola seed is more evenly spaced, giving each plant the opportunity to successfully establish and grow without competing with other seeds, increasing individual plant performance and survival.

In WA, Ground Breaker has partnered with Brad Jones from Bungalla Technologies to undertake farm scale trials at his Tammin property.

They aim to have the modified commercial planter ready for market release in 2018.

The COGGO Piper Prize is administered by the Grain Industry Association of Western Australia (GIWA) Inc.