Quiet start to new year machinery sales, but signs of strong year ahead

FOLLOWING on from an outstanding 2016, agricultural tractor sales experienced a considerable bump in January, although much of this has been put down to an overhang form the pre-Christmas period. 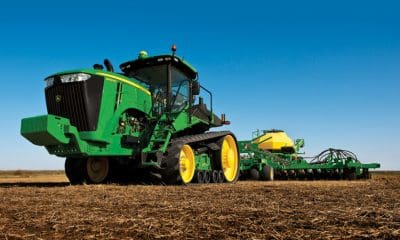 Sales of broadacre tractors are set to pick up as the year progresses.

Much of that activity occurred in the southern states with Queensland and WA reporting quiet months.

“Not surprisingly, sales of harvesters were benign with a small number of baler sales also reported,” he said.

“The sale of out front mowers continues to roar, up another 15pc on the same time last year due to the large amount of grass around. This is also having an effect on the smaller tractor sales market as customers move to renew their stock in this area.”

Looking ahead, Mr Northover said expectations were high for another strong year in the agricultural equipment market.

“Manufacturers and importers continue to see the Australian market as one of the few bright spots on a global basis and as a result are dedicating significant effort to success in this region. This is being played out in the forward order programs being offered in today’s market,” he said.

Low (often zero per cent) interest rate deals are predominant in the smaller size segments, while initiatives including pre-season service programs are being offered in the larger end.

This is in turn is leading to very strong projections occurring at dealerships across the nation.

“Many dealers are reporting that demand is a strong as ever and forecasts are being increased as a result,” Mr Northover said.

Dealers are reporting continued strength in the beef, sheep and vegetable segments along with a return of interest from the dairy sector.

Investment in land and infrastructure is continuing at a great pace and acting as a significant enabler to confidence levels, in turn leading to a willingness in the market to purchase.

“We are seeing a continuation of a more sophisticated approach to the use of agricultural equipment by farmers and contractors as they continue to adopt a greater fleet management focus,” Mr Northover said.

“Because farmers are so much more focussed on productivity and are constant seeking to avoid downtime, the importance of locking in known hourly operating costs is critical.

“This is seeing more users trading machines out at around the 3500-4000 hour mark prior to any major repairs or refurbishment requirements in much the same way as fleet operators do in other industries.

“These low-houred machines are then easily traded, thereby ensuring a healthy cycle exists.”