FAMILY-OWNED machinery manufacturer, Rebel Equipment, has this week dispatched its first ever order to Europe from its Forbes workshop in central west New South Wales. 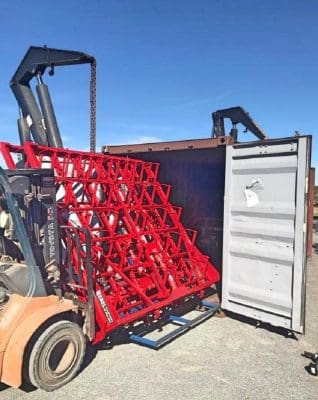 Rebel Equipment’s Nic Rebellato said the sale was not the company’s first export, but was a milestone.

It came about following an email inquiry from Stefan Södergren’s SS Lantbruksentreprenad AB, a haymaking and contracting business in Tierp, Sweden.

“We sent him some information and he agreed to buy the gear, so it’s exciting for us to be sending into a market like Europe where so much haymaking equipment is available locally.”

Mr Södergren’s company has bought two Rebel grabs and one accumulator which was built to fold up to less than 2.3 metres so it would fit into a 20-foot container.

“The accumulators we make for Australia are 3.1m wide, so this one was made specially.”

The container will take 67 days to get from Sydney to the port of Gävle in Sweden, and Mr Rebellato said he hoped more sales into Scandinavia would follow.

The Rebellato family has been making hay in the Lachlan Valley for decades, and started Rebel Equipment in 2004 to supply haymaking equipment to the domestic market.

“I’m a boilermaker, and my father is the lucerne farmer, so I’ve grown up cutting, raking and baling lucerne.

“That helps when you’re designing and making the equipment because you know what it’s required to do.

“We use what we make ourselves, so we know how to build it on designs that are better and simpler than other units on the market.”

Rebel Equipment is a regular exhibitor at field days across NSW, and exported its first units to Brazil in 2006.

“We’ve had a lot of interest from the US too. That’s our next step.”

Rebel Equipment employs four to five staff, and sells grabs and flat-top and tipping trailers to a client base where haymakers and produce stores feature.