BUILDING on the success of its first agricultural equipment auction in Australia in more than a decade, Ritchie Bros has scheduled the date of its second ag auction for September 1, 2017. 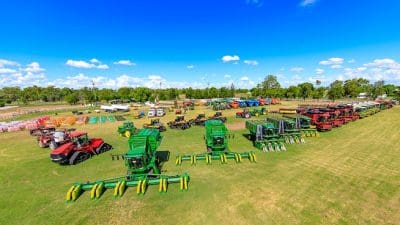 The auction this time is being held at the Sundown Pastoral Company’s property “Keytah”, west of Moree in north west NSW.

The initial auction in March exceeded expectations with over 1500 in attendance and close to 600 registered bidders.

The auction also attracted national interest, with 35 per cent of the equipment sold online and 58pc sold interstate.

“You need people who know machinery, know the market, and who customers know they can trust. Without that, you may as well list your machinery online and hope for the best”.

Internationally, Ritchie Bros’ ag equipment auction credentials are impressive. In 2016, Ritchie Bros sold over 5300 tractors, 780 combines, and 675 sprayers, as part of its $4.3 billion in total sales of assets.

Ritchie Bros’ expansion into the Australian agricultural market is starting to pay dividends with the appointment of two permanent agricultural territory managers with deep connections to farming and partnerships with the Victorian Farmers Federation and Queensland’s AgForce.

Ritchie Bros sales director for Australia, Finlay Massey, said the most common question he heard following the Moree auction was: “when are you coming back?”

“The feedback we received from both our consignors and buyers was overwhelmingly positive,” he said.

“We’re giving everyone the opportunity to participate in this auction,” Mr Murray said.

“If a farmer wants to realise the value of their assets, and attract the largest buying audience, then they should speak to us.  And speak with our customers too from the last auction; our customers have confidence in what we do.”