Seed Terminator set to be unleashed on upcoming harvest

THE FEDERAL Government has awarded a $300,000 Accelerating Commercialisation Grant to the Seed Terminator, a harvester-fitted unit which is proving to be highly effective in destroying weed seeds. 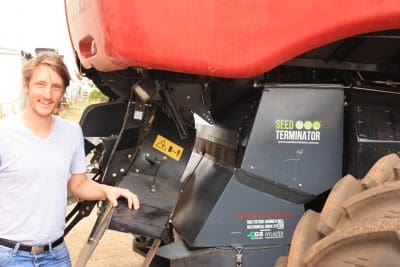 Nick Berry with the Seed Terminator.

Trials with the Weed Science Research Group from the University of Adelaide last year showed a greater than 90 per cent weed-seed kill using the Seed Terminator at 2700rpm.

“The results exceeded expectations and the grant will now enable us to develop commercial manufacturing arrangements so our units can be in the field by next harvest,” Dr Berry said.

They are also talking to installation partners in WA, SA, NSW and Victoria, and eyeing export opportunities.

The units will retail for just under $100,000, and can be fitted to new and second-hand John Deere, CASE IH and New Holland Class 7, 8 and 9 harvesters.

“I was lucky to grow up on a farm on Kangaroo Island which was pioneered by my soldier-settler grandparents, and I wanted to make a sustainable difference by developing a technology that could be used by all farmers, regardless of their size or the colour of their harvester.”

Dr Berry said the Seed Terminator offered an alternative to “drastic measures” of non-chemical weed control, such as the burning of windrows and chaff-cart piles, which depleted nutrients and ground cover.

Driven from the harvester’s engine by shafts, belts and gearboxes, Dr Berry said the unit was highly efficient with minimal transmission losses, and worked on smaller as well as large harvesters.

Farmers are invited to join the Seed Termination Society to keep up to date with trials, research and machine releases, as well as submit Expressions of Interest to participate in the unit’s commercial roll-out this year.

Funding for the grant has come through the Department of Innovation, Industry and Science.

Mr Ashenden said the grant was the culmination of an extensive process of due diligence by government, legal, accounting, patent and investor representatives which had provided the foundation for domestic and export sales of the unit.