CROPLANDS’ driverless, autonomous tractor and integrated sprayer unit captured the attention of visitors to this week’s AgQuip Field Days near Gunnedah, NSW, as it went about “doing its own thing” in a demonstration paddock. 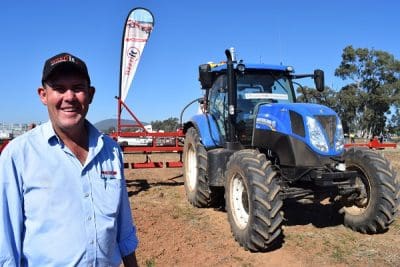 Croplands Spraying Equipment area sales manager for NSW and Tasmania, Dave Farmer, said he was proud that Croplands, a small Australian company 100 per cent owned by Nufarm Australia, was effectively the first to have an autonomous tractor commercially available and operating in Australia.

Mr Farmer said at the heart of the system was the PhantomDrive that could be retrofitted to any brand of current-model tractor that had CVT (continuous variable transmission). It cannot be adapted for power shift tractors.

He said the key to the success of the unit was that the automated tractor was fully integrated with, and controlled the operations of, the accompanying WEEDit sprayer.

“An autonomous tractor is just a toy unless it can be integrated with an implement behind it,” he said.

“This autonomous tractor, through the software in the cab, is actually controlling the WEEDit as well. All the parameters are in there.”

It has Delta T weather station capabilities for monitoring environmental conditions. The system will stop operation if conditions move outside pre-set weather parameters.

The system can be pre-programmed to avoid known obstacles in the paddock and is set up with a sophisticated sensing system that brings the machine to a halt if an unexpected obstruction appears. 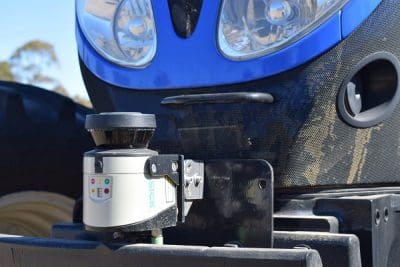 Sensor on the front of the tractor,

“The tractor has a motion sensor on the front of it that is reading 16 metres in front and the width of the machine, which is 12 metres in this instance,” Mr Farmer said.

“Once you have gone through and put in the obstacles, your A/B point, and boundary points, if it then registers an obstacle you haven’t put there, it will stop within five metres of that obstacle, send an SMS to your phone to say there is an obstacle in the way and that you need to come and move it. If the obstacle moves away itself, the tractor will take off again.”

The system is relatively easy to program for operating in defined paddocks.

If the paddock has already been mapped, that data can be brought over into the system.

But if that hasn’t been done, Mr Farmer said the operator simply entered the paddock’s boundary points so the machine knew its geo-reference lines and would not to go outside those boundary limits. 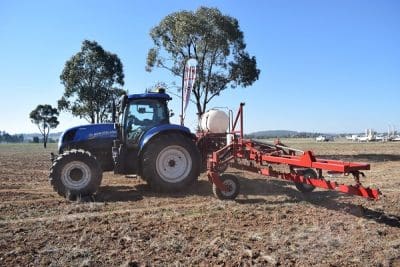 Look, no driver! The New Holland tractor fitted with a PhantomDrive autonomy system and trailing a 12-metre WEEDit optical spot spraying boom carried out dummy spraying runs in a demonstration paddock at the AgQuip Field Days.

“Then you drive around the obstacles and put them into the system; set the A/B point; and bring the tractor back to the start point. It automatically puts in all the A/B points,” he said.

“If it has enough product on board it will just drive until it gets to the end of the paddock where it will stop. The operator can then fold the machine up, move it to the next paddock and do the same thing again.

“You can have it connected to a tablet or mobile phone so you can look to see where the machine is at and change anything that is needed on the go. You can see it all externally.

Mr Farmer said the system was now commercially available and was particularly suited to the Australian broadacre and row crop markets.

“Most people are buying a 12-metre or 18m toolbar and having it paid off within 12 months. With an autonomous tractor with no staff, reduced fatigue and other benefits, it pays for itself quickly.”