A WORLD-FIRST project to plant, manage and harvest a crop with only autonomous vehicles and drones has taken robotic farming to a new level in the United Kingdom. 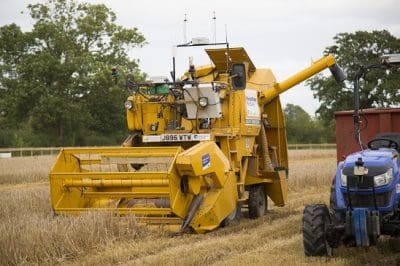 A modified, driverless, Sampo harvester and a driverless Iseki tractor with chaser bin have successfully taken off a spring barley crop in the UK that was planted and managed throughout the growing period with autonomous machines.

The ground-breaking Hands Free Hectare (HFHa) project, run by Harper Adams University in Shropshire and Precision Decisions, which aimed to be the first in the world to farm a crop exclusively with robots, has come to an end after a successful harvest.

The project used autonomous machines to plant a one-hectare crop of spring barley in March and remotely manage the agronomy and input applications through the growing period to harvest in September.

The SimTech Aitchison seeder used for planting was a vineyard drill which is normally used to add cover crops between vines to help the soil retain nutrients.

For spraying the crop, the GPS-controlled precision sprayer developed for the project was a self-contained unit attached to the tractor that used a conventional sprayer controller and operated independently while the driverless tractor traversed the field. 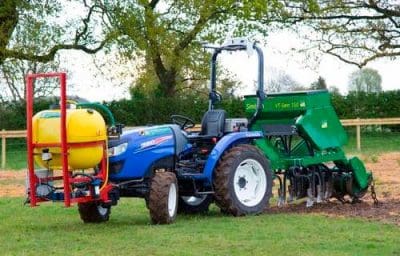 The modified, driverless Iseki tractor fitted with a sprayer and seeder.

In the final phase of the project, the harvest was carried out by a driverless, Sampo harvester and a driverless, Iseki tractor with a chaser bin.

For safety and obstacle avoidance, the equipment was not radio-controlled but acted autonomously using laser scanners which monitored ahead of the machines and stopped them if anything came within their path.

Precision Decisions mechatronics researcher for the industry lead, Martin Abell, said the project aimed to prove there was no technological reason why a field couldn’t be farmed without humans working the land directly.

“We’ve done that. We set-out to identify the opportunities for farming and to prove that it’s possible to autonomously farm the land, and that’s been the great success of the project,” he said.

“We achieved this on an impressively low budget compared to other projects looking at creating autonomous farming vehicles. The whole project cost less than £200,000, funded by Precision Decisions and Innovate UK.

“We used machinery that was readily available for farmers to buy; open source technology; and an autopilot from a drone for the navigation system.”

Mr Abell said despite the harvester being 25 years old, it performed well. 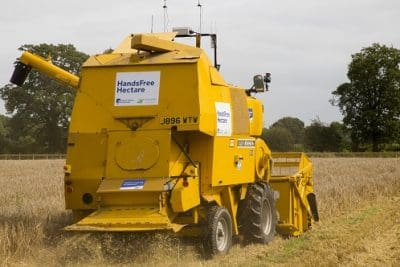 Harvest was carried out by a modified, driverless, Sampo harvester.

“Our major challenge leading up to harvest was getting the combine ready. We spent a lot of time practising; getting our headland turns right and on the day they appeared to be perfect, which was amazing to see,” he said.

“The combine drove a lot better than the tractor. We made a bit of a breakthrough with that.

“Unfortunately, we didn’t have the time to make the same adaptions to our tractor, so even though we’d practised a rolling team, as a precaution during the actual trial, we didn’t allow the tractor to get too close to the combine to avoid any accidents.

“Throughout the year we’ve been predicting a yield of 5 tonnes. Looking in the trailer, it looks like we’re not quite there. Our agronomist predicted 4.5 tonnes and it looks like he’s on the money.”

The Iseki tractor which was used earlier in the project for the spraying, drilling and rolling, was smaller and lighter than most tractors used nowadays.

The team’s mentality that smaller is better was carried through to harvest which was completed with a combine harvester designed to harvest trial plots. 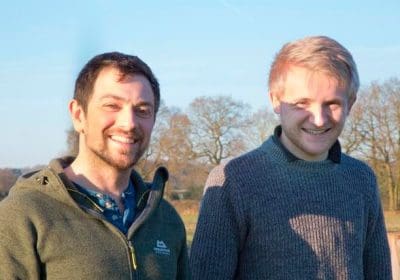 “There’s been a focus in recent years on making farming more precise, but the larger machines that we’re using are not compatible with this method of working. They’re also so heavy that they’re damaging farmers’ soils,” he said.

“If combines in the future were similar to the size of the combine we used in this project, which was a little Sampo combine with a header unit of only two metres, it would allow more precise yield maps to be created. They would also be much lighter machines.

Mr Gill said as in all farming, the weather could be an issue and provide only small windows for work to be completed, which is what occurred with the project.

“Just like anywhere in the UK, we’ve had to adjust our spraying times and harvest times due to the rain,” he said.

“This is part of the reason machines have been getting so much bigger over the years; we need to be able to complete work quickly.

“We believe the best solution is that in the future, farmers will manage fleets of smaller, autonomous vehicles. These will be able to go out and work in the fields, allowing the farmer to use their time more effectively and economically instead of having to drive up and down the fields.

“But it’s going to take new talent entering the industry to develop the technology. We hope that this project has helped to inspire some people and shown them the range of interesting and innovative jobs that are available now in agriculture.”

The team now plan to make a Hands Free Hectare beer with the spring barley that has been harvested.

They also hope to bring the project back by repeating the experiment, but with a winter crop.