MADE in England, proven in the rice fields of southern NSW and now enjoying a surge in popularity among dryland croppers, the Shelbourne Reynolds stripper front has found a fit in farming systems looking for extra ground cover in challenging climates. 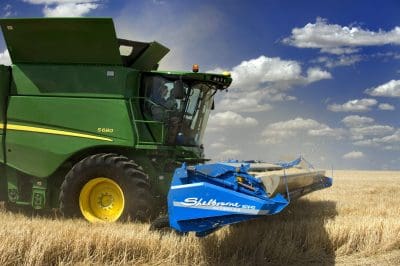 Sold in Australia since 1989 by NSW-based dealer Hutcheon and Pearce, the Shelbourne Reynolds stripper front range has now expanded to include a 12.6-metre (42’) option which is of particular appeal to plains and outer slopes growers.

Hutcheon and Pearce’s general manager for southern stores, Bill Armstrong, said the wider unit had opened up a new market.

Mr Armstrong was the first person in Australia to import the fronts in 1989 following his encounter with a test model which ended up on a rice farm at Coleambally.

“Initially, we sold the 5.4m unit, and rice harvesting was where it shone. It had great capacity and could handle wear and tear,” he said.

“Then about 10 years ago we started to get interest from growers in South Australia who were into export straw recovery.”

The Shelbourne Reynolds front offers an alternative to conventional header fronts by plucking grain from the head with the use of a keyhole on a stripping finger.

Its mechanism allows farmers to leave cereal straw intact, where it can be left standing as stubble cover, or cut and baled or spread, and was a hit with the Adelaide Plains growers.

“It gained popularity there, but we really needed a wider machine, so in 2010 we worked with Shelbourne Reynolds to build a 42-footer. The biggest machine we offer now is an adaptation of that.”

Other lengths available are 9.6m and 10.8m, but Mr Armstrong said dryland growers across NSW, Victoria, South Australia and into Western Australia had a preference for 12.6m units.

“That’s the cereal front, and people can also use it for lentils, peas and, in some cases direct-heading canola.”

Mr Armstrong said while cereal growers generally purchased stripper fronts to increase ground cover, they found it allowed them to harvest their grain crops more quickly and with less fuel than when cutting chaff as well.

“For most cereal growers, they purchase a front as part of a cropping systems decision, but they also see increased productivity in lower fuel use of about 30 per cent less fuel per tonne of grain harvested.” 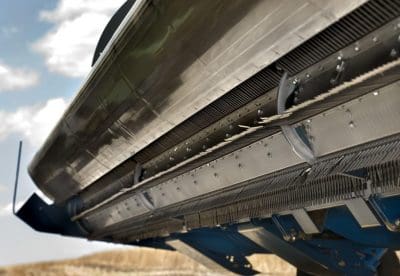 “Seeding equipment needs to be a consideration when big stubbles are left standing in the field.”

Mr Armstrong said having a growing market for the wider XCV range of stripper fronts in dryland and irrigated cereal crops was important to build strength for the Shelbourne product, and to assist the Hutcheon and Pearce Group and its dealer network in NSW when rice areas had been impacted by water shortages.

He estimated up to 50pc of harvesters used in the NSW rice industry could be using Shelbourne Reynolds fronts.

“I don’t know how many hundred I’ve sold over the past 28 years,” he said.

“We are going into all the wheat areas, dryland and irrigated, Australia wide. Some marginal dryland areas haven’t seen the pick-up of sales but we think buyers in those areas will wait and see how others in the district get on before they invest.

“Vic No Till has been pretty excited about it, and we have increased stocking levels to satisfy demonstration and support our dealerships and resellers.”

The Shelbourne Reynolds stripper front is the only machine of its type in production. It was developed in England to harvest heavy crops, and also has a large market in the US.