A 19-year-old law student from The University of Western Australia (UWA) has invented a pilotless aerial vehicle that is capable of flying five times longer than many drones currently on the market. 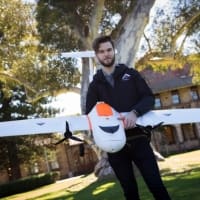 The device also has the ability to conduct aerial surveillance at a fraction of the cost of current piloted aircraft.

Tom Maclaurin from City Beach said what initially started off as a hobby building remote control aeroplanes at school, developed into a bigger passion.

“What I’ve built is a fixed-wing pilotless aerial vehicle that can be operated remotely,” Mr Maclaurin said.

“The device, named ‘Swift’, is capable of flying for more than six hours before its battery runs out and can be used to monitor anything on the ground by picking up data from sensors, taking images or recording video.”

Mr Maclaurin said the invention addressed the considerable cost and time currently spent operating piloted aerial surveillance for activities such as beach and shark surveillance and crop monitoring in agriculture.

“What I have created is not only far cheaper, but can be operated remotely and is easy to use. It is lightweight and can glide safely to a stop should it lose power, instead of current drones which drop out of the sky when their battery runs out.”

The winged device is two metres in length and weighs six kilograms.

Mr Maclaurin said his device could have many useful applications aside from beach patrols including monitoring crop levels, dam levels, and cattle locations and could be used by councils and government authorities to monitor particular areas of land.

“There is a big demand for this kind of device across many industries and in the future I’d like to see it replace current piloted vehicles because it’s cheaper, easy to operate and accessible.”

Mr Maclaurin was recently awarded Student Start-up on the Year at UWA’s Innovation Quarter (IQ) Awards for his invention.

The IQ Awards recognise innovation, entrepreneurship and research expertise for start-ups that make a difference in the community.

Mr Maclaurin said he was currently looking for investors to help him further develop his technology as well industry collaborators from local government, the agriculture industry and surf lifesaving.