Findings from WA study have found that more than $300M worth of grain was likely left in paddocks last season from front and other machine losses. Photo: Ben White

RESEARCH measuring the scale of grain and profit lost during harvest has found Western Australian growers have an opportunity to prevent harvest losses which were estimated at $300 million in 2021.

Findings from the 12-month Grains Research and Development Corporation (GRDC) investment and led by Grower Group Alliance (GGA) have been compiled from a study conducted across 75 sites during harvest 2021.

GGA found the average losses in wheat and barley crops were around 2 per cent and 4.6pc respectively.

In canola, losses were measured at 3.2pc but were as high as 10pc at some sites.

Using receival figures from Grain Industry Western Australia (GIWA) and the price of grain at harvest, findings indicate more than $300M worth of grain was likely left in paddocks last season from front and other machine losses across all crops grown in WA. 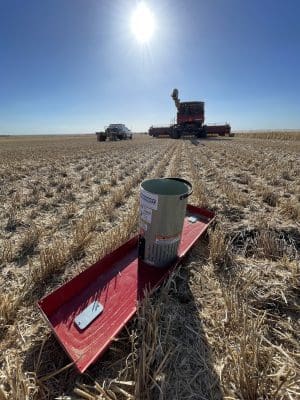 In comparison, industry-wide loss benchmarks are less than 1pc for cereals and 2-3pc for canola, but should be balanced with harvest capacity and machine running costs.

GGA program broker Mark Holland said growers had historically relied on visual assessment of grain on the ground to measure losses, but this method did not provide the accuracy needed for informed decisions about machine setup and setting changes.

“These benchmarks for grain losses at harvest support growers to strike the optimum balance between acceptable grain loss and harvest efficiency.”

Results from the study will help to inform upcoming GRDC Western Harvester Forums beginning on September 12.

Coordinated by the Facey Group in WA as part of a national GRDC investment, the forums bring together industry experts and local growers to speak on integration of harvest weed-seed control options, harvester-fire prevention and accurate measurement and management of harvest losses.

Forums are planned across the following dates and locations:

GRDC Grower Relations Manager West, Jo Wheeler, said baselines for harvest losses established in the study would help growers gauge the magnitude of their harvest losses, while harvester set-up forums connected them to the industry experts to help optimise their machines.

“Often growers aren’t fully aware of the true extent of their harvest losses and the subsequent impact on their profitability,” Ms Wheeler said.

“Findings from this study confirm that measuring the grain thrown out of their harvesters is one of the single biggest things growers can do to put more profit in their pockets at harvest.

Information on the Measuring Harvester Losses in Western Australia project is available on the GGA website.

To register for the GRDC Western Harvester Forums, visit the GRDC website or contact the Facey Group on 08 9888 1223 or email [email protected].