Barges strewn on the banks of the Mississippi River in the wake of Hurricane Ida. Image: Mike Strain, Louisiana Commissioner of Agriculture and Forestry

CHINA’S demand for imported grain has diversified and stabilised as China revamps the diet it feeds its hogs as post-ASF numbers rebuild, according to CHS Global Research analyst Joe Lardy.

Speaking yesterday about global drivers in the Australian Grains Industry Conference (AGIC) 2021 Talking Commodities session, Mr Lardy said China was not expected to achieve self-sufficiency on its major grains used, but it had “pretty much levelled up” on imports. 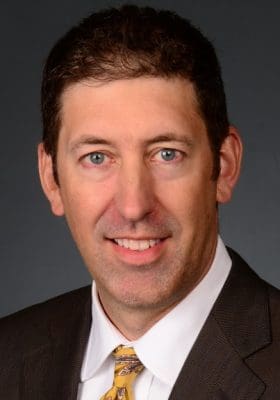 “I think China’s going to kind of stall out.

“They’re still the hub of commodities.

“They’re the biggest buyer of beans in the world, and certainly a massive buyer of other commodities.

“However, nothing is pointing me in a direction where I’m looking at China, a saying: “boy, we’re in for a massive export year’.

“I think they’re just spreading things around and being a lot smarter about it.

“I just think overall they’re going to plateau for a few years.”

The Chinese Government has pegged its corn ending stocks at 200 million tonnes (Mt), a figure Mr Lardy said could be “right, wrong or indifferent”.

Accuracy aside, Mr Lardy said the size of the number was significant: “China wants to say it’s comfortable on stocks.”

Prior to the African Swine Fever Outbreak in 2018, around 60 per cent of China’s hog herd lived in the backyard or village system.

“Now there’s been this massive shift because decimation of the hog herd was so huge, and they said: ‘we really need to change this’.

“China has created these hog hotels and industrialised this system.”

This means that food scraps and local fodder crops are now being replaced with corn in industrialised hog diets. 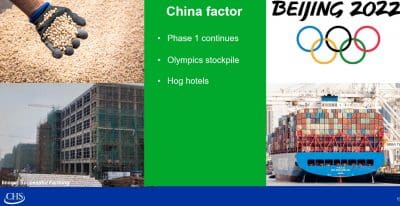 China’s ration mix is changing. This slide from CHS Joe Lardy’s presentation shows construction of a hog hotel in an image from Successful Farming.

“That’s equating to 30M additional tonnes for the hog herd as it rebounds from ASF.”

Mr Lardy said the Chinese Government in the mid 1990s encouraged the inclusion of soybean meal in hog rations, and it had been popular ever since.

“Earlier this year, between March and May, the Chinese Government said: ‘ it’s time to cut back on the use of soybean meal in herd rations’.”

As a result, Mr Lardy said the market has seen “a huge increase in alternative feedstuffs” going into China.

“China has imported a lot of sorghum, a lot of barley, a lot of cassava, a lot of wheat.”

He said Beijing being host to the 2022 Winter Olympics in February, and under the spotlight on the world stage, was another reason China was gunning for stability in food and feed security.

“I think it’s going to be important for China to have an Olympics stockpile.”

Brazil is forecast to produce “an absolute monster” soybean crop of 145Mt in 2021-22, and Mr Lardy said there was potential for further growth in production.

“Does Brazil pull off a 145Mt soybean crop? If they can, that will give China everything they need.

“That could potentially displace some of the US market share.

“In Brazil, if they grow it, they export it; they don’t store things year to year.”

Mr Lardy said Brazil looked set to continue to be the world leader in soybeans, and very likely the major supplier to China at the expense of the US, where soybean exports to China were down 10pc year on year.

“Brazil has the acres; they continue to expand.”

Mr Lardy said the Brazilian state of Mato Grosso had only 7-10pc of its area under row crops, and a further 25-30pc under pasture, with the balance rangeland and rainforest.

“The pasture land is very easily convertible; if they wanted to do 1-2pc more it could easily be put into row-crop production.”

Wheat slips in US

Mr Lardy said US soybean and corn areas were rising at the expense of wheat, which was more susceptible to adverse weather events as evidenced this year, and disease.

“We’re making these incremental jumps every handful of years here.

“I think we’re going to continue to see this shift to corn and soybean acres and the one commodity that’s really suffered has been wheat.

“Wheat is not putting up a big enough fight to pull back into production.”

He said the US spring wheat crop had suffered the most.

“Before we got into the growing season we were looking for 500-550M bushels, and it wouldn’t surprise me if we got into under 300M bushels on spring wheat.”

Mr Lardy said damage caused by Hurricane Ida had closed grain terminals at New Orleans, and they would be out of action for at least two weeks, but more likely one month.

“Things here are a giant mess.”

As well as disrupting exports, damage from Ida has also disrupted the flow of fertiliser up country from the Gulf of Mexico.

Mr Lardy said the supply chain could catch up from a two-week delay, but longer would be a challenge.

“If you’re looking at a timeline for six weeks, we’re going to start looking at exports that are harder to get back.”

Ethanol production in the US is a major user of domestic corn, and Mr Lardy said the “enormous shift” to adoption of electric vehicles in the US had impacted the country’s ethanol demand.

“We are seeing a definite change in purchasing.”

Mr Lardy said as soon as 2025, 20pc of vehicles sold in the US could be electric.

“About 90pc of all car commercials we see are for electric vehicles.

“There really is a shift under foot here, and I think it’s going to have a significant impact.

“We’re seeing the same type of situation with electric vehicle sales in China and in Europe.” Electric vehicles are having an impact on US ethanol demand. Image: CHS Global Research

Mr Lardy said the Baltic Freight Index was the highest seen in more than a decade, and that could well put exports from the Pacific North West in the box seat.

“I think it really gives a good advantage to the US off the PNW.”

He said high global freight rates could put Australia in “a really strong position just from a logistics standpoint…to maybe take advantage of some of that Chinese demand.”

“Looking ahead to 2022, I think global freight is going to be a really big issue and those with proximity to China are going to have an advantage.”

AGIC is the major annual event for the Australian grains industry beyond the farm gate, and is an initiative of Grain Trade Australia, the Australian Oilseeds Federation and Pulse Australia.