AMONG the throng of numbers published in the USDA October World Agricultural Supply and Demand Estimates (WASDE) and global markets and trade reports released by the USDA overnight, it is the news of a tightening balance sheet for US Hard Red Winter (HRW) wheat this year which has the potential to move markets.

The US HRW wheat class stock projection at the end of the marketing year in May 2022 is now projected to be 8.5 million tonnes (Mt), or 311 million bushels (Mbu) compared with the projection one month ago of 9.4Mt (347Mbu).

Other US wheat class stock projections were altered this month only at the margin.

Total US wheat ending stocks in all classes would decline from previous year to this year end May 2022 by 31pc.

In its, October, Grain: world markets and trade report smaller wheat crops grown by some key exporters have importers increasingly relying on Australia to meet their needs.

Australia wheat production rebounded in 2020-1 after the multi-year drought, enabling exports to more than double compared to the previous year. 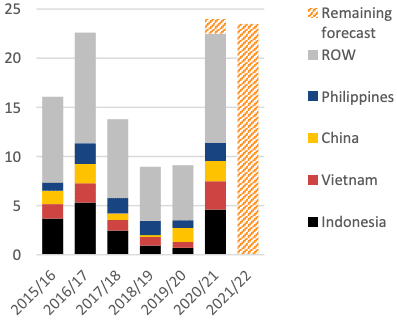 Exports are expected to hit a near-record in 2020-21 and are forecast only slightly lower in 2021-22 as larger beginning stocks offset a smaller crop.

Australia’s share of global exports is forecast to rise to 12pc in 2021-22 compared to only 5pc two years ago.

Australian exports remain primarily focused on Asia, given the preferences for its classes of wheat, in particular white wheat, and its close proximity.

In 2020-21, Australia successfully recaptured market share in Indonesia, traditionally its largest destination and the second-largest global importer behind Egypt, as Black Sea and US exports to that market contracted.

In 2021-22, large production shortfalls in Canada are expected to keep the door open for further Australia exports to Indonesia.

Vietnam has also become a major destination for Australian wheat, with its robust demand for both food and feed uses.

Despite trade disputes with other commodities, China has continued to purchase high-quality wheat from Australia.

Australia has also made remarkable gains in the market in The Philippines, which is primarily supplied by the US.

In the short term, Australia’s current competitive prices amid sufficient supplies will spur it to become the third-largest exporter.

Australia is expected to continue to supply Asia based on its competitive freight rates. Nearby markets can purchase with shorter delivery times relative to other exporters.

Many of its key markets are witnessing strong consumption growth but do not produce wheat.

As long as there is sufficient production, Australia’s exports are likely to remain robust over the longer term.