WHEAT exports from Argentina are forecast to reach their highest level in five years on the back of a bumper crop in the South American country and competitive prices, according to the latest crop report from the United States Department of Agriculture (USDA). 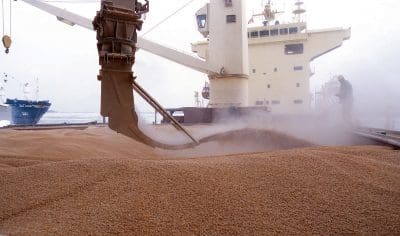 The rise in Argentinian production comes a few years after the removal of government policies that limited export opportunities, resulting in low prices, which turned some Argentinian producers away from wheat. Consequently, wheat exports hit a 40-year low in 2013/14, recovering only slightly the following year.

However, exports began to move more freely last year, spurred by the elimination of export restrictions and the depreciation of the Argentine peso.

In 2016/17, producers responded favourably to the changes in market dynamics by producing the largest crop in six years.

Argentina’s re-emergence as a prominent exporter has implications for the global wheat market, which is already dealing with bin-busting supplies in many exporting countries, including Australia.

The US benefited from Argentina’s reduced supplies in recent years, briefly becoming the largest wheat exporter to Brazil in 2013/14.

Since then, Argentina has not only regained its place as Brazil’s major supplier, but has also expanded exports to many countries in Africa and Asia, where import demand is rapidly growing.

The USDA report said at the same time as there was record global wheat production, global trade had been boosted to a new record with higher imports for Bangladesh, India, Mexico, and the Philippines more than offsetting a cut for the European Union.

Higher exports for Argentina and Australia have been partially offset by lower trade for Canada.

Higher canola production in Australia and sunflower seed in Serbia and Turkey more than offset a lower cottonseed production estimate in China.

Global soybean exports are projected higher this month as stronger Brazil and Paraguay shipments more than offset lower US trade.

Imports are projected higher this month as stronger demand from China and Thailand more than offsets reductions for Mexico and Saudi Arabia.

Global soybean stocks are up this month, led by Brazil and China.

The growing demand in the Vietnam livestock and aquaculture sector, coupled with favourable prices, has also encouraged Vietnam imports of soybean and soybean meal.

In 2016, Vietnam imported over 1.5 million tonnes of soybeans and nearly 5.1Mt of soybean meal, boosting total protein meal consumption by 13 per cent.