Neptune in the Odessa region is one of Ukraine’s deepwater grain terminals, and a joint venture between Cargill and MV Cargo. The distance between key Black Sea terminals and zones of potential conflict on the Russia-Ukraine border is expected to buffer its impact on grain exports from terminals including Neptune. Photo: Neptune

THE Australian Government has this week advised its citizens not travel to Ukraine due to the risk of armed conflict, and has directed the departure of dependents of Australian Embassy staff from Kyiv.

It shows tensions tied to Russia’s amassing of troops on the Ukraine border are seen as a danger by governments around the world, and the recent rally in US wheat futures shows the tensions have spooked the markets too.

And no wonder: Russia and Ukraine are major exporters of wheat to Asia, the Middle East and Africa, also markets for Australia, and heavy hitters in barley and oilseed exports.

But India’s remarkable wheat export surplus, another bumper year for Australia, and the fact that Russia and Ukraine are in the back end of their shipping year are all helping to insulate the Asian consumer from the rallies and jitters being seen in American and European markets.

One source India’s current crop export surplus could end up being considerably higher at 7Mt or more, and this had made India rather than the Black Sea the alternative origin for Asian millers.

“If it’s low-pro they’re after, it’s India they’re looking at.”

However, the source said Asian markets were watching US markets reflect the volatility caused by the words and actions of Russia, and wondering what to do.

“Buyers are really uncertain about whether they should be buying to build a buffer, or do they think this won’t affect me too much because I’m an Asian miller, and prices will overshoot.”

In an article published on the Thomas Elders Markets (TEM) website this week, TEM analyst Andrew Whitelaw said the situation on the Ukrainian-Russian border has caused wheat prices to rise sharply in the past week. 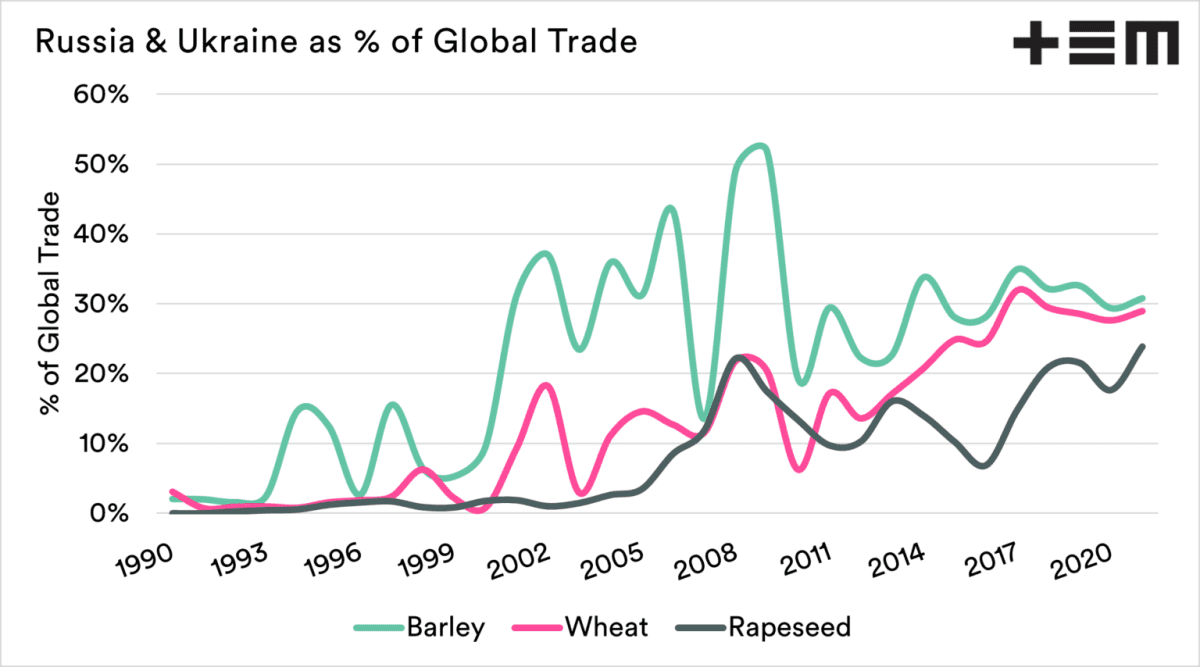 He said both Russia and Ukraine have grown massively in importance for the global grain trade in the past 20 years, and Russia has moved from being a net wheat importer to the world’s largest wheat exporter.

“This region has grown to be of the utmost importance to ensuring the world is supplied.

Mr Whitelaw’s guess is what we’re all hoping for: “I personally don’t think an attack will happen.

“It will not be in Russia’s best interest to attack Ukraine.

“The end result will be thousands of Russian and Ukrainian deaths.”

Also on the TEM platform, TEM contributor from Russia, Andrey Sizov, said he thought the current wheat rally based on Russia-Ukraine tensions could be overdone.

Mr Sizov said a new deal between Russia and the west could come out of the current tensions, and Russia, Ukraine, the US and the EU could all report is a big victory.

“If this optimistic scenario turns true, wheat is likely to be under pressure again.”

Mr Whitelaw agrees, and said if the hot war does not eventuate, risk premiums currently priced into the market will begin to fade. Cargo for despatch to Ukraine is prepared at the Dover Air Force Base in Delaware. Photo: US Department of Defense

Rabobank agricultural analyst Dennis Voznesenski said the distance between the likely flashpoint, if it cannot be avoided, and Ukraine’s grain terminals  will mitigate the impact of conflict on markets.

“If conflict eventuates, it will begin in eastern Ukraine, while the vast majority of Ukrainian grain export terminals, over 80 per cent, are in the south-west of the country.

“This means that the world market will likely still be able to procure Ukrainian wheat, at least in the short term even if a conflict eventuates.

“During the Crimean crisis of 2014, Russian grain export logistics were not disrupted.

“We expect a Ukrainian response to be defensive to Ukrainian territory only and so not disrupt Russian exports.

“Turkey could theoretically close the Bosporus Strait which could disrupt Russian exports, but they did not in 2014, and there are no expectations it would do so in a conflict in 2022.”

With around 40pc of Ukraine’s wheat production in its east, Mr Voznesenski said a full-scale and prolonged confrontation could disrupt a large volume of production.

“In this situation, we could see supply holes open up that may need to be filled by alternative suppliers like Australia.”

“Ukraine accounts for nearly 10pc of global exports on average and just under half of those exports head to Asia.

Mr Voznesenski said while the Black Sea export program was currently in its quieter period, it picks up towards harvest in July-August.

“That means that a near-term disruption to world markets will be notable but not catastrophic.”

Mr Vosnesenski said energy prices could also rally if the flow of gas from Russia to Europe is affected.

“If we see any disruption to gas flows, energy prices in Europe will escalate notably and the ability to produce certain farming chemicals will be impacted.

“Even if external parties do not step into a Ukrainian-Russia conflict, sanctions could present a challenge for trade in wheat, gas and component fertiliser ingredients that is worth watching.

“For wheat itself however, it’s worth noting that Russia’s largest export customers are Turkey and Egypt, and they are unlikely to follow suit on sanctions, especially in the high-price market they are buying in already.”

“As long as the tensions remain, markets will be trading higher on the risk of a conflict simply because two large wheat trading nations are involved, and a short-term conflict is possible.”

Impacts not yet seen in Australia

GPA chief executive Colin Bettles said grain producers understood the influence of politics in global grain markets and input prices, and the need to manage any subsequent impacts on their farm business.

“We are not aware of any immediate influence or disruption to grain supply from the Black Sea region due to this conflict but subsequently there could be an upside in local grain prices for Australian producers.

“However, there could also be flow-on effects for fertilisers which are already high.

“This reinforces GPA’s calls for greater government focus and investment in local manufacturing – such as bringing green fertilisers to market sooner – to secure local supply and reduce key input costs for growers.”

GrainGrowers chair Brett Hosking said Russia and Ukraine were two of the largest global exporters of wheat and barley, and an important part of the global grains supply chain servicing many of the same markets that Australian does.

“Despite the potential for short-term premiums for Australian grain exports as a result of tensions between these countries, it is always in the long-term interest of global supply chains to have stability and certainty, and we hope and pray for a peaceful resolution to the current tensions.”

Multiple companies including Cargill, the ASX-listed GrainCorp, and Glencore’s Viterra have trading offices and investments in Ukraine.

Grain Central understands their operations are continuing as normal as most of their employees are Ukrainian nationals.