EXPORT sales of Australian durum are in the doldrums as European buyers focus on filling their orders from a large and high-quality Canadian crop, and rail against the high Australian dollar. 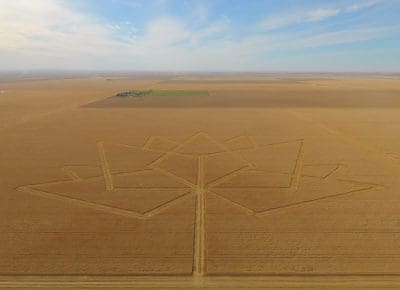 A field of durum displays the Canada 150 logo. Photo: Agriculture and Agri-Food Canada.

“The Australian dollar has appreciated a lot lately, and with competition from Canada, there’s a fair bit of headwind for Australian durum at the minute,” he said.

“The Canadians have had their best crop in 20 years in terms of quality, and it’s favoured in places like Italy.”

However, at least one bulk shipment of durum out of Newcastle has already been booked for shipment in coming weeks, and Mr Howard said another was possible in April.

“There’s zero boxed trade going on, so we’re hoping for another bulk shipment.”

Europe and North Africa are the two volume markets for Australian durum, with Italy and Morocco key destinations.

The market for DR1, the top grade of durum, is currently quoted at around $340/t delivered Newcastle, down $20-$30/t from its spikes between harvest and Christmas.

Growers are believed to have sold around half the crop to exporters, and some of that unsold portion is likely to go to the feed market, where patchy prospects for the maturing sorghum crop and a chronic shortage of feedgrain in durum production areas are pushing up values.

Eastern states consume about 40,000-50,000t of durum for the human consumption market, while South Australian pasta manufacturer, San Remo, consumes much of that state’s durum production.