A bakery in The Philippines. Photo: Peter White, AEGIC, 2019

THE Philippines is on track to be the fourth-largest destination for Australian wheat in the 2021-22 international marketing year, which ended on June 30. With just one month of Australian Bureau of Statistics (ABS) wheat export data required to complete the picture, shipments to the South-east Asian archipelago stand at 2.341 million tonnes (Mt), or a tad over 10 per cent of total Australian wheat exports.

Shipments of wheat to The Philippines have been solid in the first five months of the 2022 calendar year, following a record Australian harvest. Executed sales averaged just under 300,000t per month for a total of 1.495Mt, or 64pc of total exports since July 1 last year.

However, that is expected to change in the second half of the current calendar year. The Philippines Government recently changed the corn and rice import tariff, modifying market access for exporters holding Most Favoured Nation (MFN) status until the end of 2022. This change will likely shift considerable volumes of feed wheat and feed barley imports to corn, assuming market price relationships hold for the remainder of the year.

Under Executive Order 171 (EO 171), Series of 2022, which came into effect on June 15, in-quota corn tariffs have been reduced from 35pc to 5pc, and over-quota tariffs drop from 50pc to 15pc. The
minimum access volume (quota) for 2022 is unchanged at 216,940t. With this in-quota quantity already
exhausted, all imports for the balance of 2022 will fall into the over-quota category.

The USDA’s Foreign Agricultural Service (FAS) has reacted to the change, slashing 600,000t off its 2022-23 wheat import forecast, landing on 5.7Mt against the official USDA estimate of 6.3Mt. The corn import forecast was increased by 1.15Mt to 1.9Mt on the back of lower domestic production and higher demand. The FAS has pegged corn production at 7.9Mt as opposed to the USDA’s official forecast of 8.3Mt, with increased production costs leading to a smaller than expected planted area. Reduced fertiliser application is also expected to negatively impact crop yields.

Australian wheat shipments to The Philippines are almost exclusively purchased by the stockfeed sector.
With no tariff on imports of Australian feed wheat, it still holds a 15 percentage-point advantage over MFN corn imports. However, landed prices for Australian feed wheat have been running at levels that negate the price advantage for the consumer. Feed millers are likely to favour corn for its additional energy value as long as the current price relativities remain in place in the second half of the year. 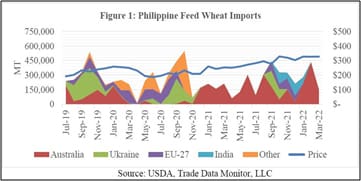 feed wheat the balance at 3.264Mt. Australian wheat made up 34.5pc of the total, but dominates feed wheat imports, holding 56.8pc of the trade (Figure 1). The second-biggest supplier in that period was Ukraine, with India third. Both nations are now out of the export equation, putting Australia in the box seat to meet a significant chunk of Philippine feed wheat demand for the second half of 2022, and through 2023 after EO 171 has expired.

Up against US milling

The Philippines has traditionally purchased its milling wheat requirements almost exclusively from the United States (Figure 2), with a five-year average of 2.74Mt per season. While that status has been 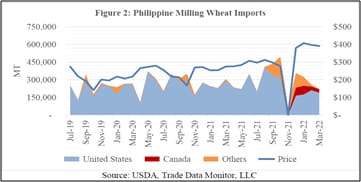 challenged in the 2021-22 marketing year as the government looks for cheaper alternatives to help keep food inflation in check, the US has still supplied the bulk of this season’s purchases. It seems a perception held by many Philippine millers that the quality of US high-protein wheat is more reliable than that of Australia continues to dominate import decisions.

On the wheat consumption front, the FAS have shaved 600,000t off the USDA’s official estimate to arrive at 5.65Mt. Food, seed and industrial demand is expected to remain relatively static year-on-year at 3.85Mt, with the entire decrease reflected in the fall in stockfeed and residual wheat demand from 2.4Mt to 1.8Mt.

The FAS expects Philippine corn demand to increase to 9.75Mt due to the tariff change, against the USDA’s pre-tariff forecast of 9Mt. With food, seed and industrial consumption unchanged at 2.1Mt, the entire 750,000t increase falls into the stockfeed and residual category, where demand is now expected to total 7.65Mt.

According to Philippine customs data, barley imports in the nine months to the end of March totalled 480,000t, with Australia the sole supplier. Total barley imports in the 2020/21 marketing were 80,000t, meaning imports were already up by 500 per cent with one-quarter of the season remaining.

The Philippines is one of Australia’s most important grain destinations in Asia. Trade volumes have grown significantly with the massive rebound in domestic production in the last two years. While a significant freight advantage will continue to drive sales, the opportunity remains for expansion of milling wheat demand at the expense of the US.