MORE THAN ONE million tonnes of barley will be shipped to Saudi Arabia for arrival February and March 2020 through the Saudi Arabia Grains Organization (SAGO) barley tender which was awarded overnight Monday.

Four cargoes of 60,000t will arrive at the port of Dammam in the Arabian Gulf, one each half-month through February and March, while 13 cargoes are committed over the same spread into Saudi Arabia’s Red Sea ports. 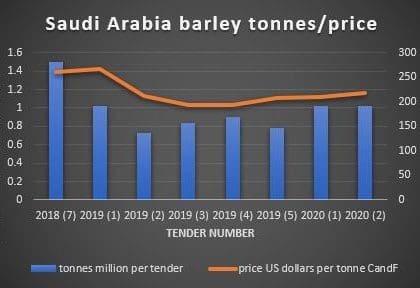 Each has the option to ship from origins which include Australia, Black Sea region, European Union, South America and North America excluding Canada.

While traders said plentiful supplies from Argentina, EU, and Russia were available to suit the arrivals period, the chances of some Australian filling some slots will depend on price direction in coming weeks as Australian and Argentine new-season barley lands in the bin.

Western Australian major bulk-handler and marketer Co-operative Bulk Handling Ltd (CBH) referenced the tender in its weekly harvest report released on Friday, and saw “Australia potentially being competitive for some of these positions.”

Saudi Arabia’s annual barley imports in two recent seasons were under 8Mt per annum, lower than previous as a result of an abundant season, and a shifting pattern of feed usage which includes an increased amount of corn imported and consumed.