AUSTRALIA exported 33.3 million tonnes (Mt) of grain in 2020-21 (Oct-Sep), enough to break the previous record set in 2016-17 of 31.5Mt, according to data released in an Australian Competition and Consumer Commission (ACCC) report.

The figures were contained in ACCC’s Bulk grain ports monitoring report – data update, and reflect the large export surplus created by the second-largest grain harvest since the ACCC started collecting grain data in 2011.

“The 2020-21 season presented a good opportunity to test both the effectiveness of new and competing ports, and the impact of reduced regulation on these markets, which has been implemented over the past few years,” ACCC deputy chair Mick Keogh said.

“The data shows the new facilities are opening up opportunities for growers and exporters, and the ACCC welcomes industry feedback on whether these developments are sustainable or are a response by exporters to constraints associated with existing facilities or limits to the overall effectiveness of the Wheat Ports Code.”

The report shows that on average only five exporters used each port, compared to eight in 2011-12.

“Despite a record year for bulk grain exports, the data shows a decline in the average number of exporters per port, while at the same time a growing number of new and smaller port facilities are increasing exports.”

This has meant significant changes over the past few years, with two of the three major port terminal service providers, Viterra and GrainCorp, beginning to lose market share to the growing number of the new bulk grain port terminal facilities across Australia.

The other major provider, CBH, continues to provide the vast majority of services in Western Australia.

“The ACCC is particularly interested in looking at whether the increased use of new port facilities is a result of the large harvest, the economic efficiency of these facilities, or the difficulty securing access to the incumbent ports.”

ACCC said in its report that, unlike previous shipping years, it had received limited contact from exporters concerning access in 2020-21.

An industry update report which includes feedback from growers, exporters, and port terminal service providers is due to be released in early 2022.

While bulk shipments from Australian ports usually peak during between February and May, in2020–21 some states reported their highest volumes from June onward.

This effect was strongest in NSW, where three of the four largest exporting months occurred after the end of the peak period, though in total there were slightly more exports in the peak period at 2.4Mt than from June to September 2021 at 2.3Mt.

T-Ports had its first full season of operation in 2020-21 from its Lucky Bay terminal on South Australia’s Eyre Peninsula.

Its utilisation rate in the peak shipping period was 90pc, topped only by Newcastle Agri Terminal and Quattro’s Port Kembla facility, both in NSW, at more than 95pc.

Lowest utilisation rates occurred at Viterra’s Thevenard in SA (25pc) and all Queensland terminals (0-67pc), and were a function of small crops in the port zones.

Most other bulk grain ports had a utilisation rate of 70-90pc during the peak period.

ACCC notes that the estimates of terminal capacity used by the ACCC are based on estimates provided by owners, and have different methodologies. 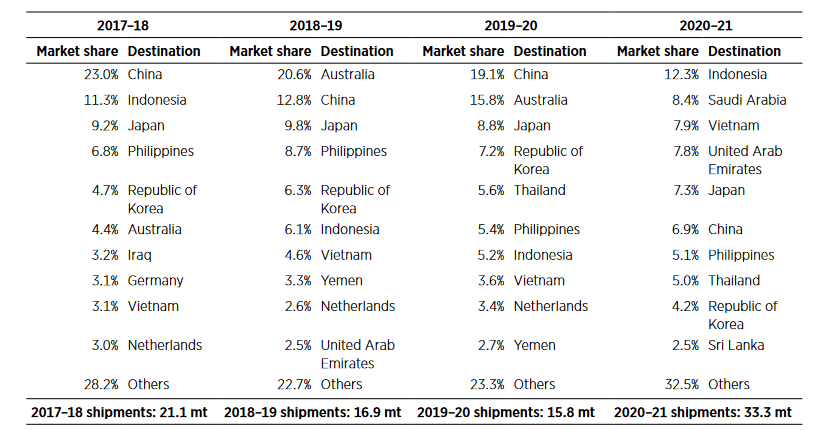 It sees the continuing increase in on-farm storage in some regions as giving growers greater control over their marketing and transport decisions, including when grain is delivered.

“The increase in on-farm storage and alternative off-farm storage solutions has also supported theentry of new port terminal service providers, who traditionally are unable to replicate the extensive supply chains of incumbent operators.”