AUSTRALIA exported 239,766 tonnes of barley in December, up from 76,482t in November, according to the latest export figures from the Australian Bureau of Statistics (ABS). 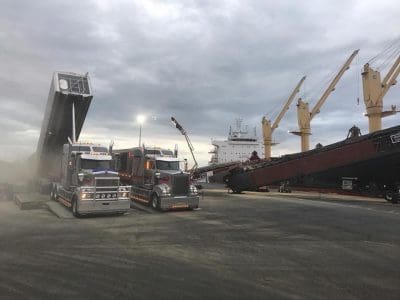 Barley being loaded for export in 2018: Photo: Baileys Sea Lake

Malting barley exports in December totalled 99,018t, up from 4790t in November, and feed barley shipments also jumped, with bulk shipments to China and Thailand accounting for much of the rise to 140,748t from 71,692t over December.

China has been a buyer of Australian barley, both feed and malting, since its anti-dumping investigation into the historic pricing of Australian feed barley started in November 2018.

“In January, the Lachstock shipping stem suggests that Australia has shipped around 223,000t to Chiina, and looks like it will do a similar volume in February,” Flexi Grain pool manager Lachlan Hume said.

He said Australia’s supply of exportable barley to China has been restricted over the past two seasons due to increase local feed consumption which has driven up the price, making Australian feed barley uncompetitive globally.

Australia last year exported about 2.4Mt of barley to China, but Mr Hume said the figure is this year expected to drop to more like 1.3Mt.

“One could argue that the decrease in demand is due to the anti-dumping investigation, but the reality is that we have a finite amount of barley to supply this year to China regardless.

“The large spread between feed barley and wheat has seen full utilisation of barley in the local feed ration, which has seen Oct-Feb transhipments more than double to 731,000t from 325,000t in 2018-19.”

“We had record low stocks which ruled out Oct-Nov shipments, but our Oct-Feb export figure is set to reach 580,000t.

“If we revert to a similar back-end export flow to last year, we only need to do 100,000t per month to China to achieve the 1.3Mt figure, which is all that our balance sheet can currently accommodate.”

Australia is set to get closure on China’s anti-dumping investigation when it is finalised in May, and Mr Hume said speculation on the outcome was large.

“Some view the worst-case scenario being the imposition of an import tariff, but no one has spoken about the result if no action is taken.

“If the investigation yields no actions, then Australian barley might find itself priced to take out more feed demand than we can afford to lose.”

Mr Hume said Thailand’s buying of Australian barley has continued to increase, as the economics of importing it versus other feedgrains which attract a hefty tax make it an obvious choice for compound feeders.

A Thai tender for Australian barley is due next week.

On the global front, Mr Hume said barley demand has increased, with Saudi’s import pace picking up over the past four months, which implies a 1Mt increase in annual demand.

“Australia is today competitive with Argentina and the Black Sea into Dammam based on current WA pricing, but it is hard to see this sustained when we look at our overall supply.”