FARMERS across Australia are forging ahead with their barley plantings, while China forges ahead with its anti-dumping investigation into Australian barley shipped in years past.

While the Australian barley industry is fearful China’s investigation could have the same impact as China’s 2018 probe into United States sorghum pricing, it also holds hopes this valued market will remain open.

The trade has not yet heard of any preliminary findings from the investigation, which is looking for evidence of injurious dumping as defined by World Trade Organisation rules.

Nor should it expect to: submissions from around 40 Australian barley exporters were made in February, and are believed to cover a period of investigation from 1 January 2014 to 30 September 2018.

“The only feedback we have is no feedback,” one trader said. 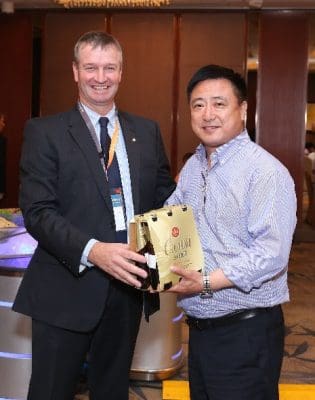 Grain Producers Australia chair and Rupanyup, Victoria, farmer Andrew Weidemann said the Australian barley industry was hopeful that exports to its biggest barley market, based on a close trade relationship which has developed over decades, could continue.

“China has got to prove a case under WTO rules, and I think the evidence we’ve submitted doesn’t support the idea that Australia has done that,” Mr Weidemann said.

China’s anti-dumping investigation into US sorghum, which occurred around this time last year, quickly found reason to impose barriers on the flow of US sorghum into China, and it stopped the trade in its tracks for many weeks.

By contrast, Australian exports to China of barley harvested last year, appear to be continuing apace.

China has imported around six million tonnes of Australian barley in recent years, but a reduced export surplus caused by the eastern states’ drought has reduced availability in the current marketing year.

“The long-term outlook for malt and malting production in Australia is good,” Mr Weidemann said.

In its monthly barley supply-and-demand report released this week, Lachstock Consulting said the winter crop now being planted included a barley estimate up from the April figure.

“The new-season increase in barley planting has largely reversed the reductions we made a month ago,” the report said.

“With the late season break, we have seen canola area drop, with barley picking up some of those hectares up.”

“Over the next month we will clearly start to step into more significant barley adjustments if the weather stays dry in WA and SA in particular.

“It looks like Victoria and the barley regions of NSW will get what they need to make a start, albeit with follow-up required shortly thereafter.”

Terminals in Brisbane have been receiving feed and malting barley by ship from SA and WA for close to 18 months to fill the shortfall caused by disappointing crops in Queensland and NSW in 2017 and 2018.

Newcastle and Port Kembla in NSW have been receiving both types of barley since last year and in recent months Geelong in Victoria has been unloading malting as well as feed barley from Western Australia.

Geelong is expected to receive one cargo of mostly malting barley from now until early next year to help supply its Malteurop and GrainCorp-owned BBM facilities which need shipped grain to supplement tonnage available in south-eastern Australia.

The Malteurop facility is one of the largest of its type in the world, and its capacity was expanded last year to enable it to process 200,000t of malt per annum by using around half of Victoria’s malting-barley production.

According to Lachstock, the export pace of barley from WA “continues to impress”, and shippers are factoring in ongoing need for barley cargoes in Queensland, NSW and Victoria.

“We need to start seeing that slow down rapidly from June to September to avoid overshooting the mark.” 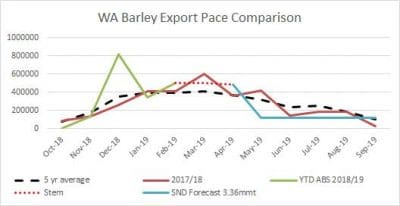 Lachstock said the pace of barley exports from South Australia had been slower than expected.

“Trans-shipments by sea have been stronger than expected, leading us to modestly increase interstate transfers to Queensland and increase feeding in Queensland with a lot of feedlots sticking with barley in the ration and booking out forward.

“It may mean that SA exports come down a little and interstate transfers increase further.

“Interestingly, new-crop transshipment calculations are not light years away either.”

Lachstock said new-crop supply and demand was looking to resemble “something more normal on what was overall an average crop estimate, as long as Australia received at least average export demand to China”.